He represents Ward 1, which encompasses all of Overland Park north of 87th Street, as well as the Round Hill neighborhood.

Council Member Heley has lived in Ward 1 since 1994. Three generations of his family have called Overland Park home. Heley cares about our neighborhoods and is active in our community. Sustainability being important to the future of our city’s quality of life, he is involved with the Overland Park Environmental Advisory Council and has served on the City’s Advisory Council on Parks + Recreation. He is also the Council representative of the Legacy of Greenery Committee.

Heley is an active member of Climate Action KC. He previously served on the board of Metropolitan Energy Center, the Shawnee Mission UU Church Board of Trustees and the Alumni Network Advisory Board for the Youth Volunteer Corps. Heley is a Johnson County Citizens Academy graduate.

Professionally, Heley works as the Executive Director for Heartland Conservation Alliance (HCA). The organization proactively conserves, protects, and restores natural lands and open space within the Kansas City region, benefiting the community and future generations by improving water quality, creating recreational opportunities, protecting life and property, and preserving natural and cultural heritage. Previously, Heley was a community engagement manager for Harvesters—The Community Food Network and served as Harvesters’ liaison to the Overland Park Chamber of Commerce. Heley was also a former press intern at the Obama White House and worked in constituent services as a Congressional intern. To help pay for his education, he worked as a package handler for UPS and was a member of the Teamsters union. 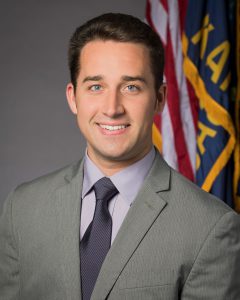