Overland Park traces its roots back to 1905 with the arrival of its founder William B. Strang Jr., who platted subdivisions, including one named “Overland Park,” along a military roadway southwest of Kansas City.

Strang envisioned a self-sustaining, well planned, “park-like” community that had strong commerce, quality education, vibrant neighborhoods, convenient transportation and accommodating recreational facilities – all amenities that today, make Overland Park one of the best places to live and grow up.

Prior to incorporation, the area that is now north Overland Park was part of the Mission Urban Township, which included the cities of Mission and Prairie Village. Overland Park’s formation was based on land other communities shunned.

Before Strang’s death in 1921, he established several housing developments, an interurban railroad and an airfield. You can see remnants of his interurban line in Downtown Overland Park today, along with his limestone car barn at 79th and Santa Fe Drive and his Carriage House at Thompson Park.

On May 20, 1960, Overland Park was incorporated as a first-class city with a population of 28,085. The nationally-recognized city today encompasses 75.6 square miles of Johnson County, and has more than 200,000 residents, making it the second most populous city in Kansas and metropolitan Kansas City.

The 1960s and 1970s brought major development to Overland Park, including many residential subdivisions, Metcalf South Shopping Center, Corporate Woods, Oak Park Mall, and the early days of Deanna Rose Children’s Farmstead. During this time, the City built a new City Hall and moved many operations to Santa Fe Drive and Antioch, where City Hall is today.

During the 1980s, the city experienced a boom in commercial and residential development. By 1988, the city’s population passed 100,000.

Planning for the Future

In the early 1990s, City officials focused their efforts on renovation the historic downtown area, dedicating the Clock Tower Plaza and building the Farmers’ Market pavilion. Eventually, this included opening the Matt Ross Community Center at 81st and Marty.

Overland Park continued to thrive in the early 2000s, until the nationwide recession in 2008. During this time, Overland Park began a community-wide look at land use along and near Metcalf Avenue, called “Vision Metcalf.” This plan guides redevelopment in Downtown Overland Park and farther south along Metcalf.

In 2017, the community began a community-wide project to consider not just land use, but the city’s strategic vision for the future as a whole. Forward OP incorporated public input from across the community to develop goals that support legislative action to create a welcoming, engaged, sustainable, and connected city with a strong economy.

Overland Park’s landmarks commission is responsible for reviewing and making recommendations on historical landmarks and sites in the city. 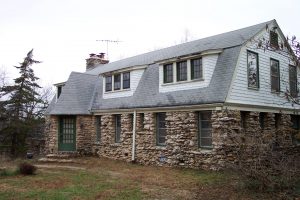 This well-preserved house, constructed in 1928, is set into a steep rocky ridge above a tributary valley of Wolf Creek. While there have been alterations, this building has a high degree of architectural integrity.

For many years before the house was constructed, the land was associated with the Shawnee Indians. The original land patent was awarded to To Wah Pea and her heirs on March 13, 1885. This site was part of the tract belonging to the Black Bob band. Joseph and Johnson Blackfeather were some of the heirs, hence the Blackfeather name associated with this land. Most of the Shawnee moved away during the Civil War when the border was threatened by raiders. Settlers moved onto the land as soon as the war was over, and disputes over the land continued for 20 years.

The Blackfeather house was built as a country home and rural retreat for a wealthy Kansas City family when that became the trend. In 1934, another owner used it as the Blackfeather Club and Recreation Corporation, with fishing and shooting as attractions. At that time, corporate retreats were popular. It again became a private residence in 1947, and has remained in the same family.

More than 30 homes in this neighborhood are nationally-recognized for the architecture of the mid-twentieth century modern movement ranch house style. These homes retain integrity of location, setting, design, materials, and workmanship to convey feelings of 1950s suburban neighborhoods. 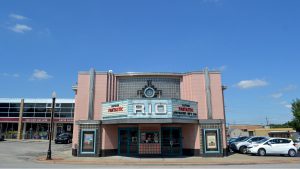 The Historic Overland Theater, built in 1946, opened Christmas Day, featuring “The Hurricane” with Dorothy Lamour and “In Old California” with John Wayne. At that time, the sidewalks along 80th Street were made of wood, and the price of tickets was 20 cents for children and 50 cents for adults.

At one time, the theater’s name was changed to the KIMO South. In 1977, it became home to Theatre for Young America.

In 1988, the city purchased the building to ensure its history was preserved. It opened as The Rio Theatre in 2000. Some renovations have been

made with an effort to keep the original appearance. The original peach tile and entry structure remain. 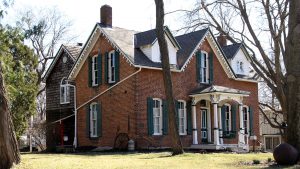 Considered by some to be the oldest inhabited residence in Johnson County, the E.C. Chase House was built around 1869 by Elijah Cornell Chase.

Born in 1837 to a Quaker family in Providence, Rhode Island, E.C. Chase – whose family created the Chase Financial Institution and Cornell University -bought the farm on Antioch Road after the war where he first built a house of walnut timbers. Later in 1869, he added the brick part, which is standing now.

This property was originally sold as part of a 60-acre plot. Then in the 1960s, it was platted into the present development, which includes numerous single-family homes.

The house, which has some Victorian features, originally was constructed as a farm house but has been altered many times. The two-story brick portion was added to an existing one-room house in 1869. This one-room portion no longer exists. Another exterior change is the addition of the dormers; not all changes to the house have been documented.

The current owners, the Westerns, have done numerous internal renovations.

Recognized as a city landmark in 2008, the Bryan Gleason House was reportedly built in 1926 on property owned by a Shawnee Indian named Red Carpenter in 1858.

The Gleason home is a front gabled bungalow, constructed primarily of stone, which is unique for this type of structure. 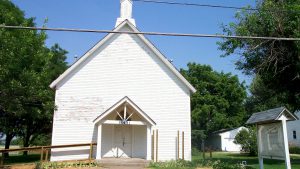 Prior to construction in 1884, church members formed as the Methodist Episcopal Church of Morse in 1883 and met in the Burr Oak School at 151st Street and Switzer Road. They engaged architects Divelbiss and Stratton of Olathe to design the building and George McCaughey of Morse built the church at a cost of $1,927.13, which included the interior furniture and fixtures.

The church is a wood frame structure with no significant architectural elements or embellishments on the structure, except for a steeple that stands approximately five feet above the roof.

The building served as a Methodist church from 1884 to 1985, when the church and land was given to the Blue Valley Historical Society, which in turn deeded the property to the Overland Park Historical Society in 1998. 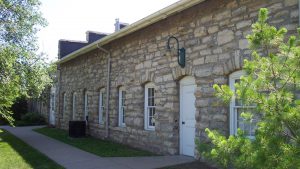 He built a 17-mile railroad beginning in 1906, which followed the Santa Fe Trail from Westport in Kansas City, Missouri, to just east of Olathe. Strang was a pioneer in community development. Land values along his new railroad line increased tenfold over the next 40 years as people moved into residences and small farms in the area.

The Car Barn, constructed in 1908, was built as a power plant, which was necessary when the company converted to electric power and housed two generators. The Strang Railroad brought thousands of people to see the nearby Aviation Park and airfield, and was instrumental in bringing about the original settlement of Overland Park. 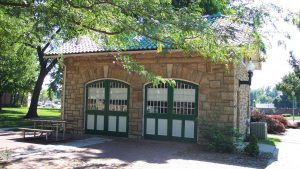 The Carriage House was constructed in the early 1900s by Overland Park founder, William B. Strang, Jr., to house his carriages, automobiles and serve as a residence for his driver.

The Carriage House was owned by Strang until his death in 1921. His wife and her family owned it until the 1930s, when Tom Riley, Strang’s partner, used it until the Strang Line Railroad discontinued service in 1940.

The building stood vacant for several decades until the city obtained the property in the 1970s. It was rehabilitated in the 1990s to serve as the office for the Overland Park Historical Society, which still occupies the structure. 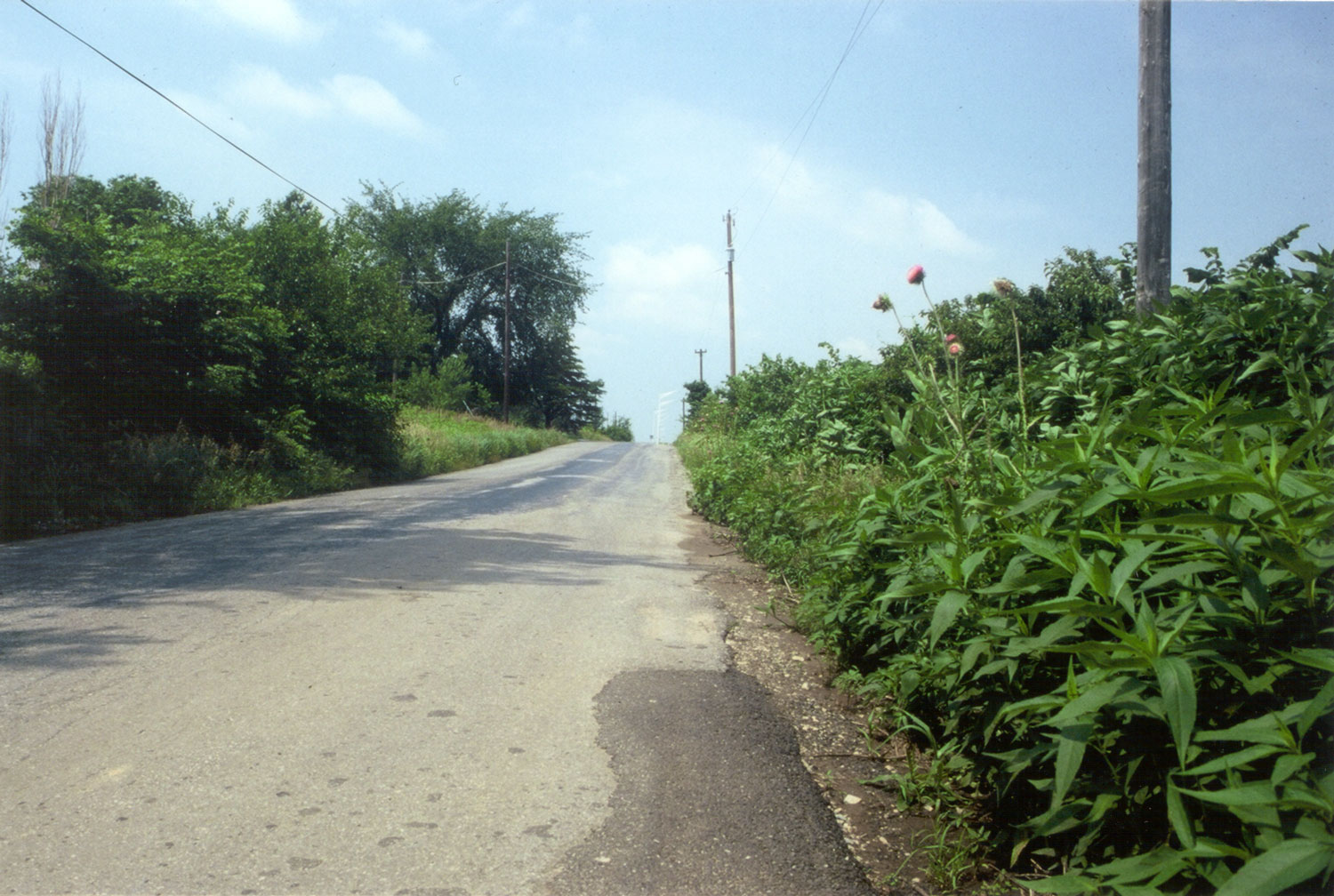 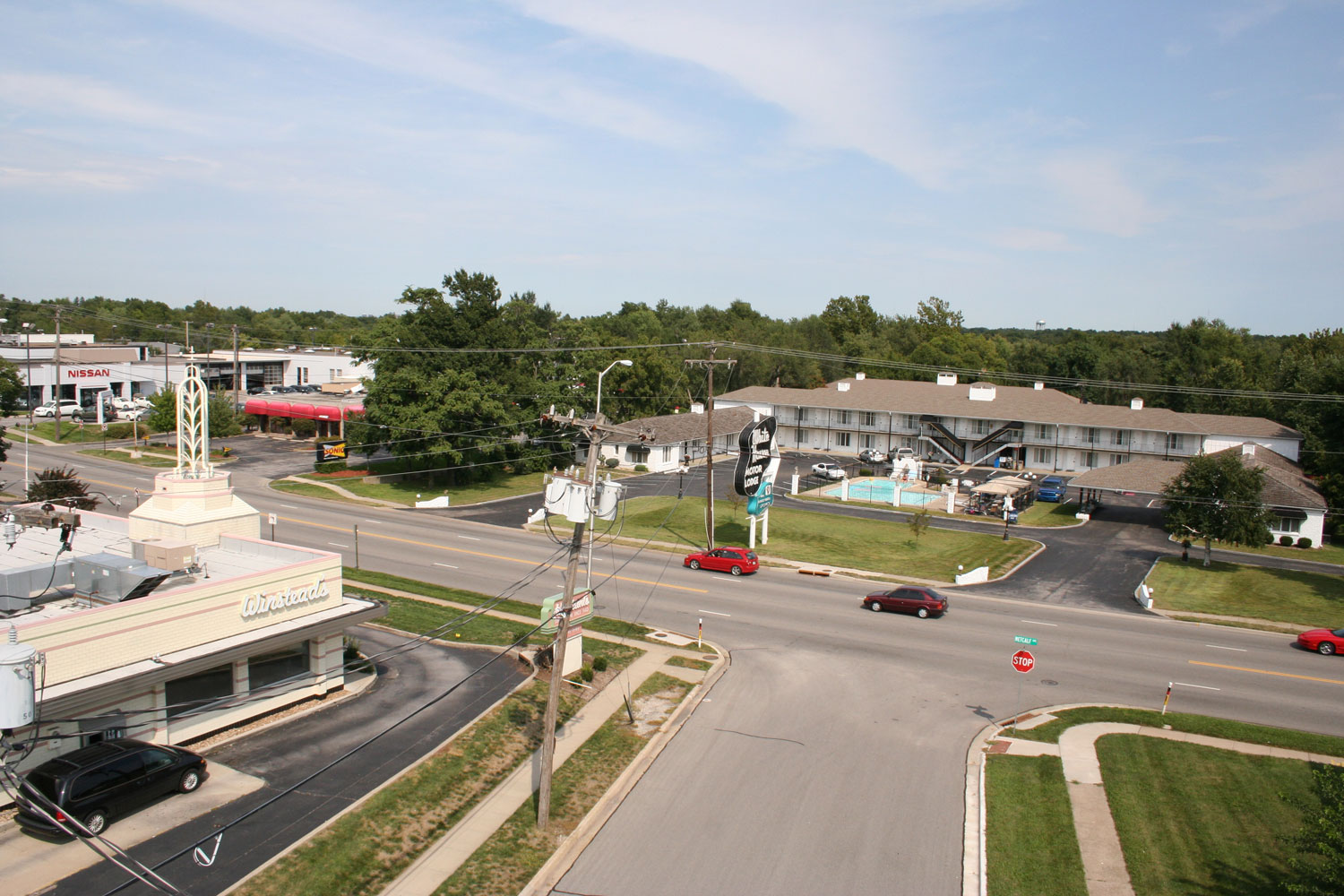 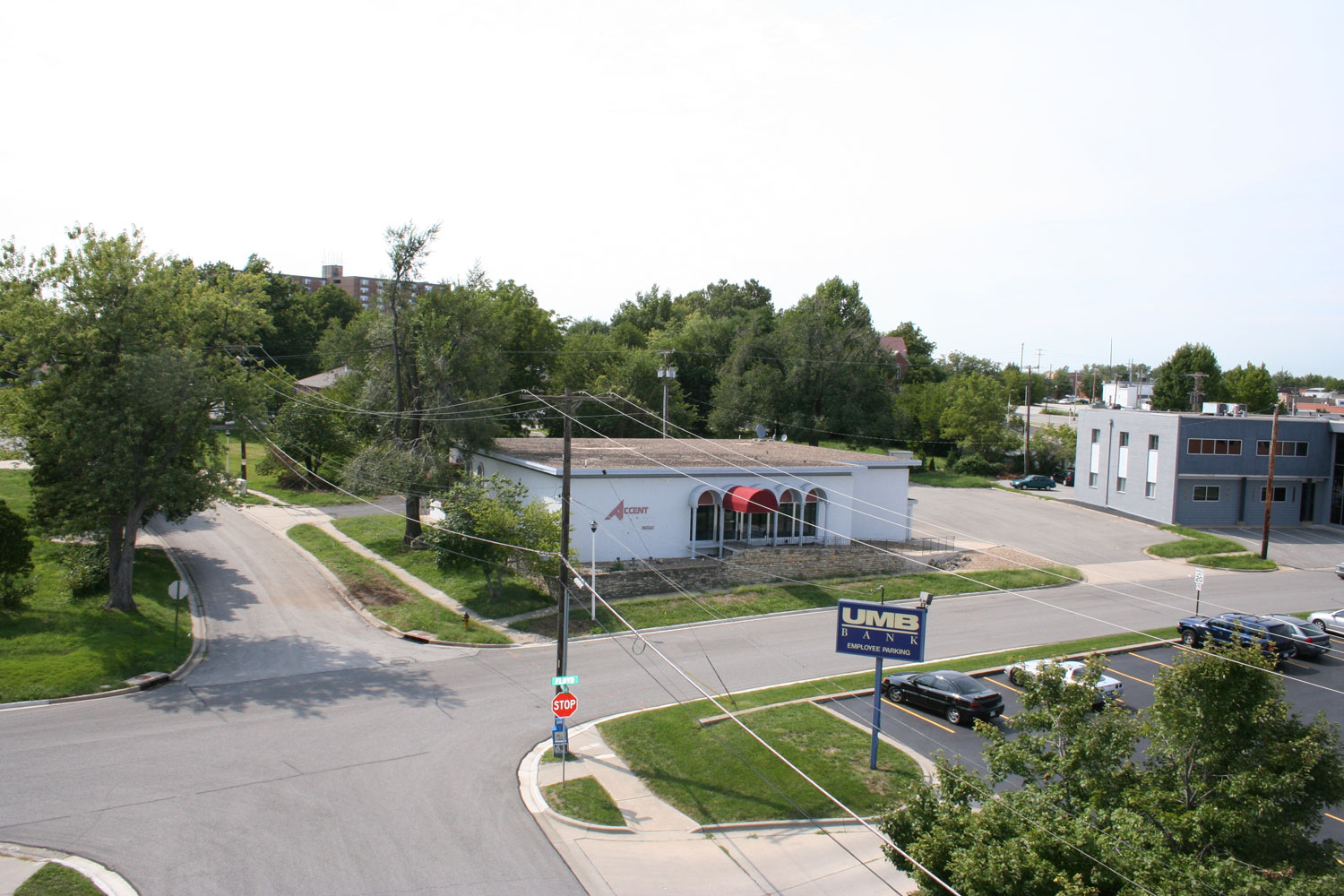 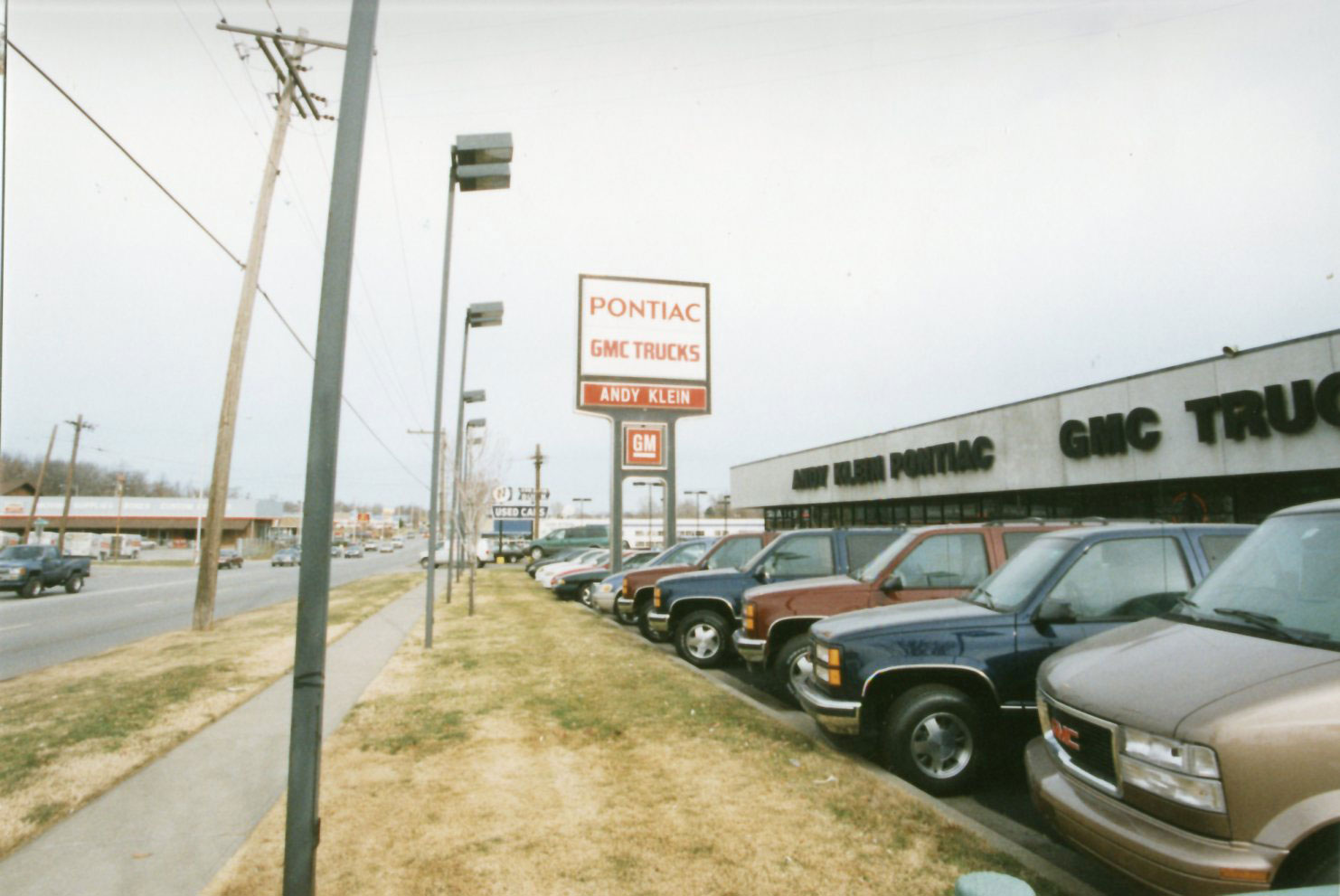 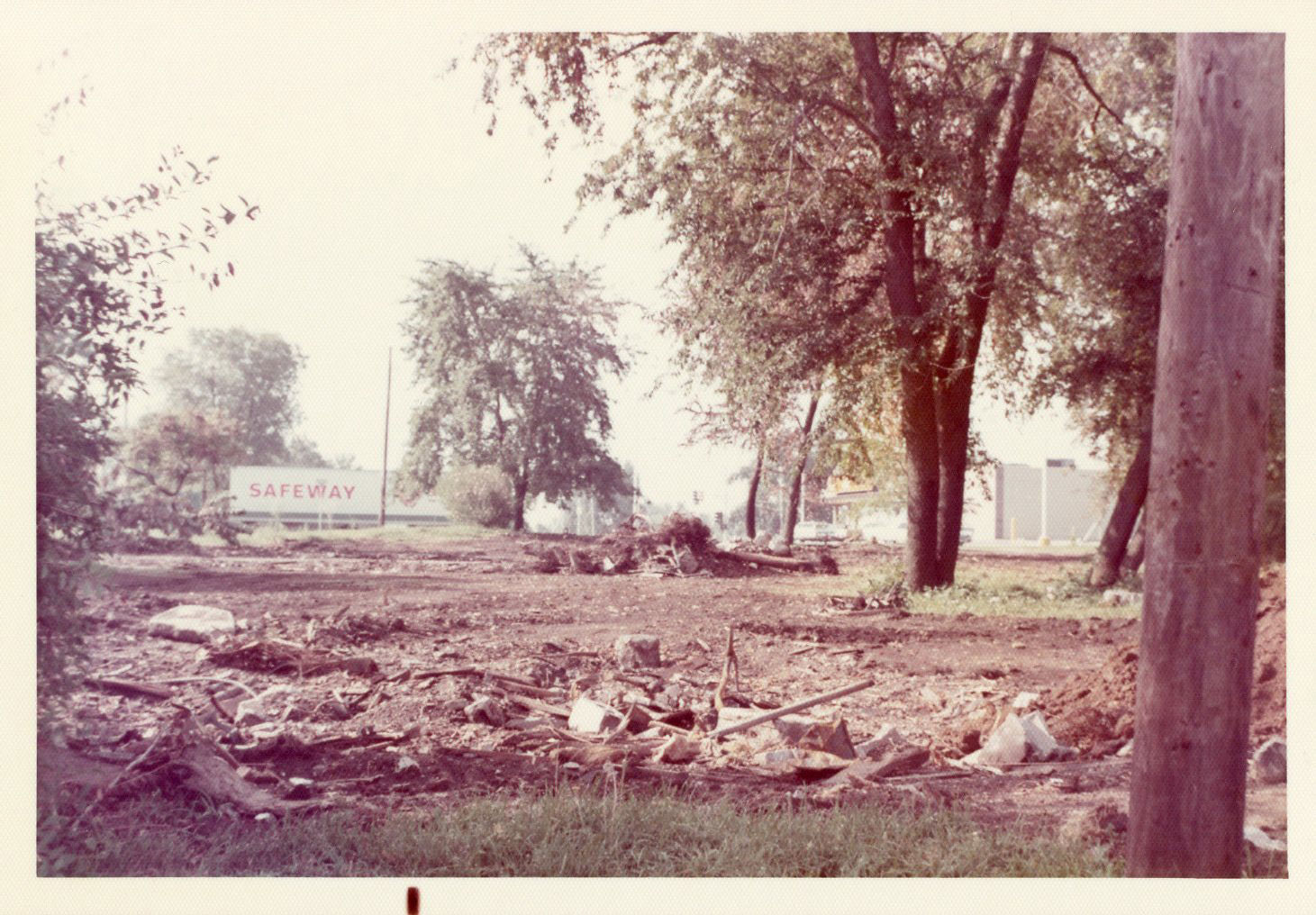 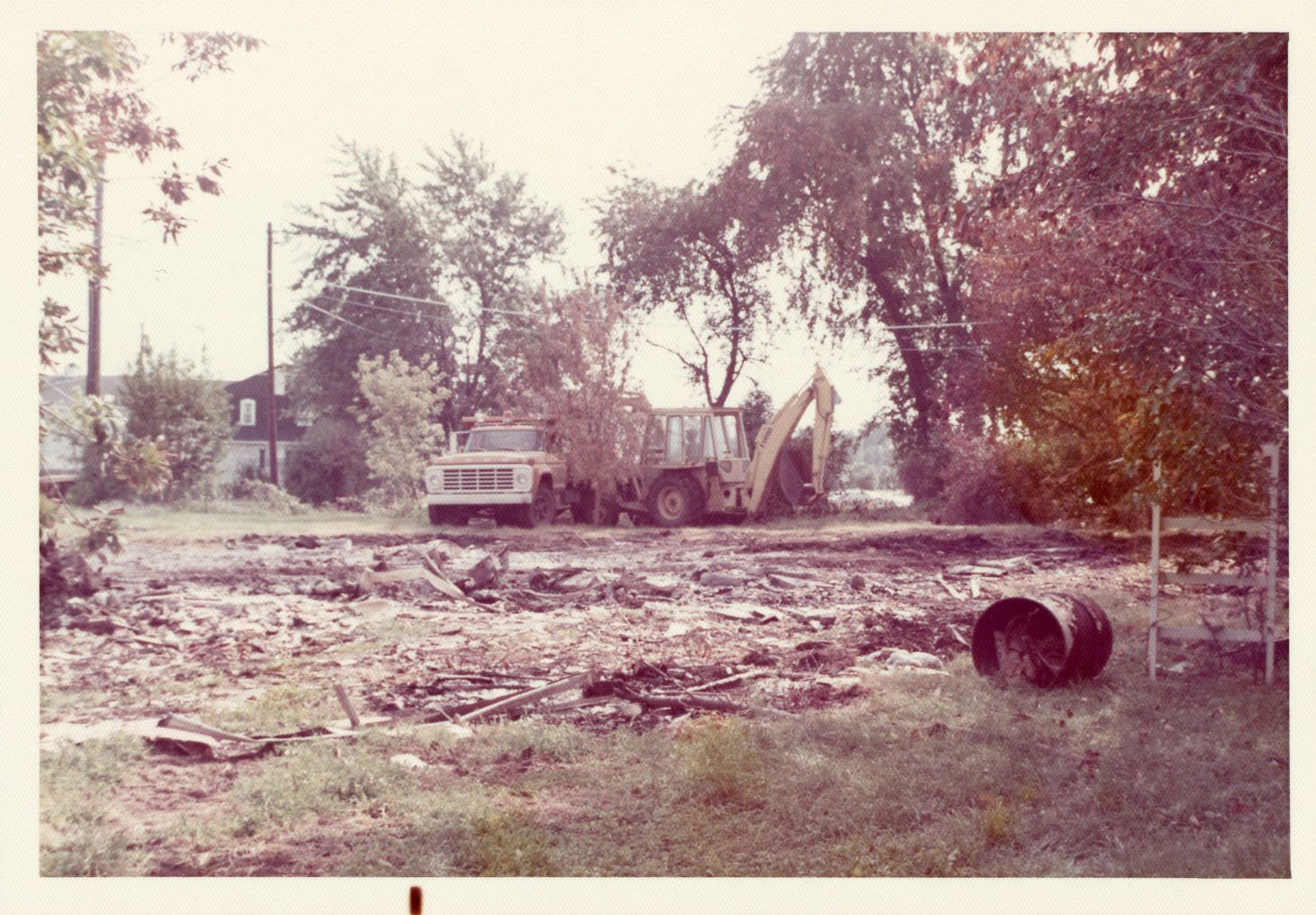 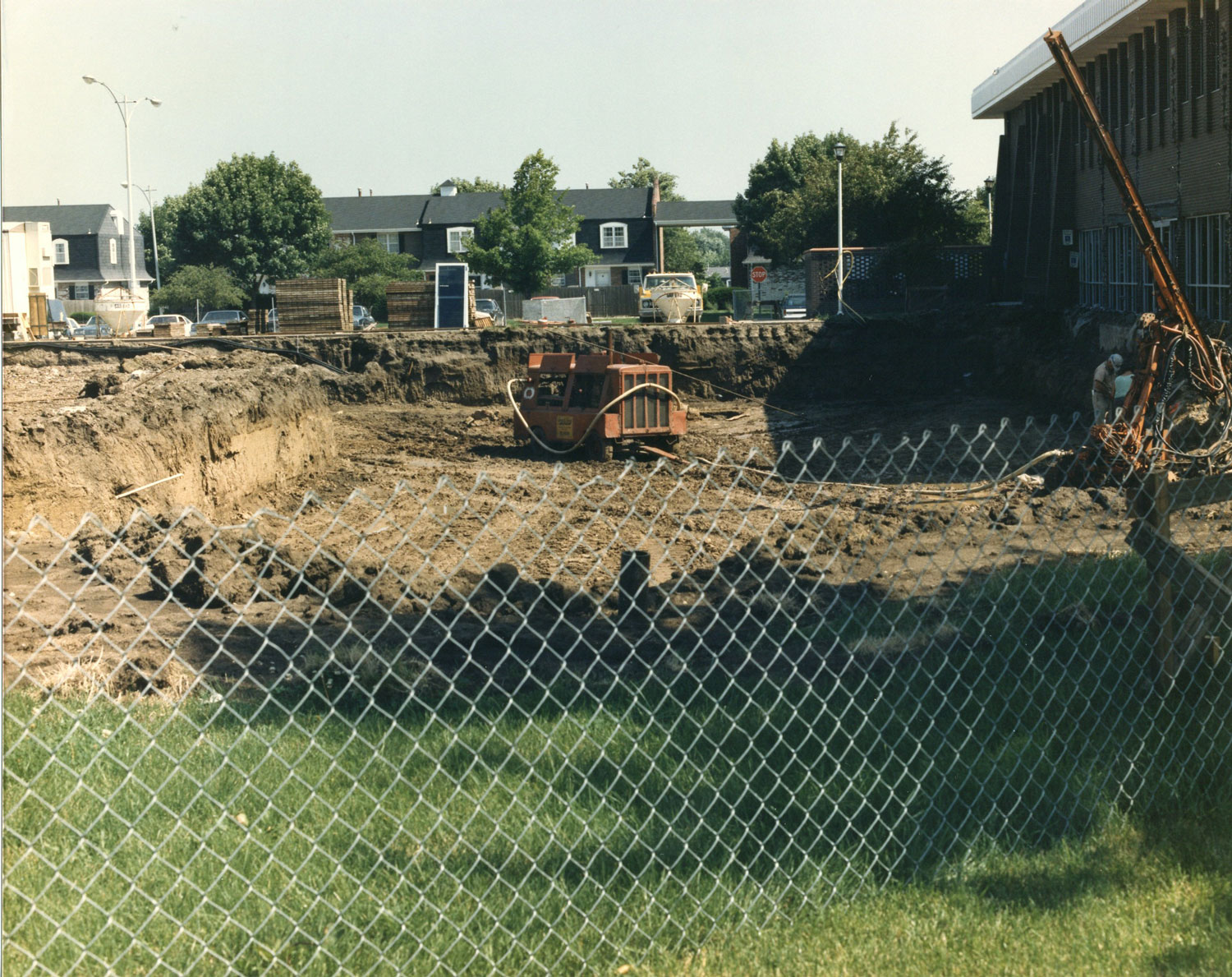 Facing north at the site of the City Hall addition, June 1985. 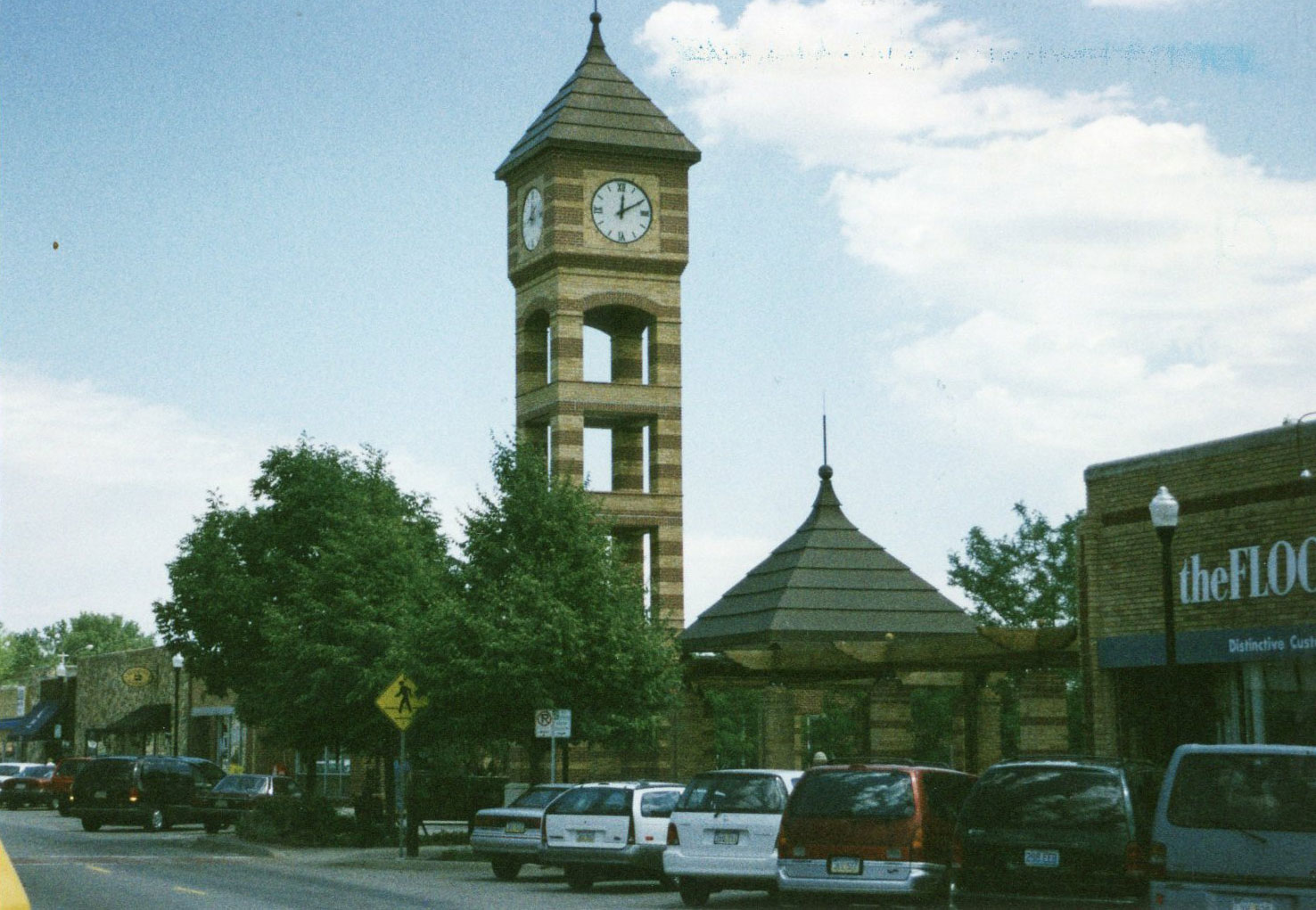 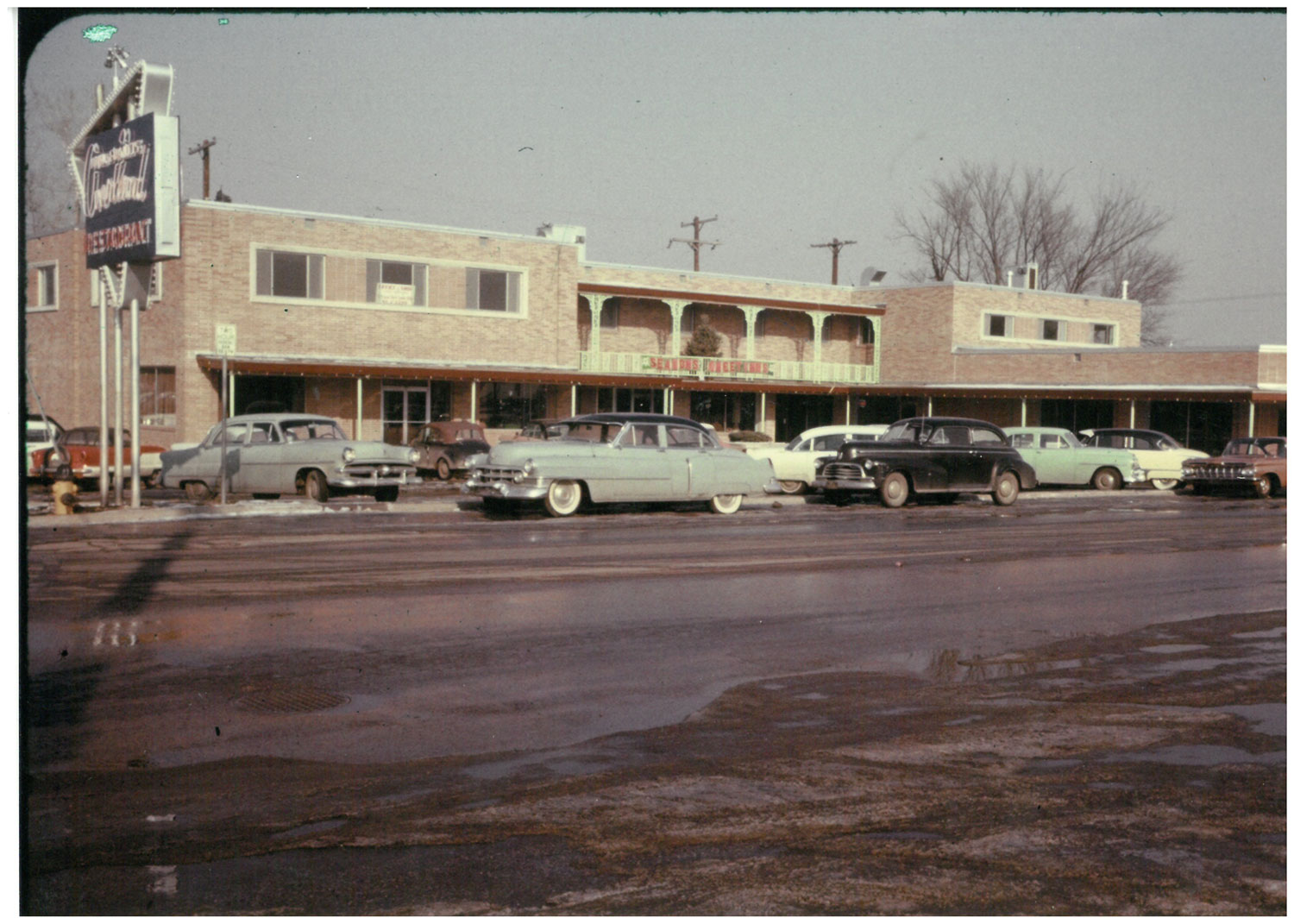 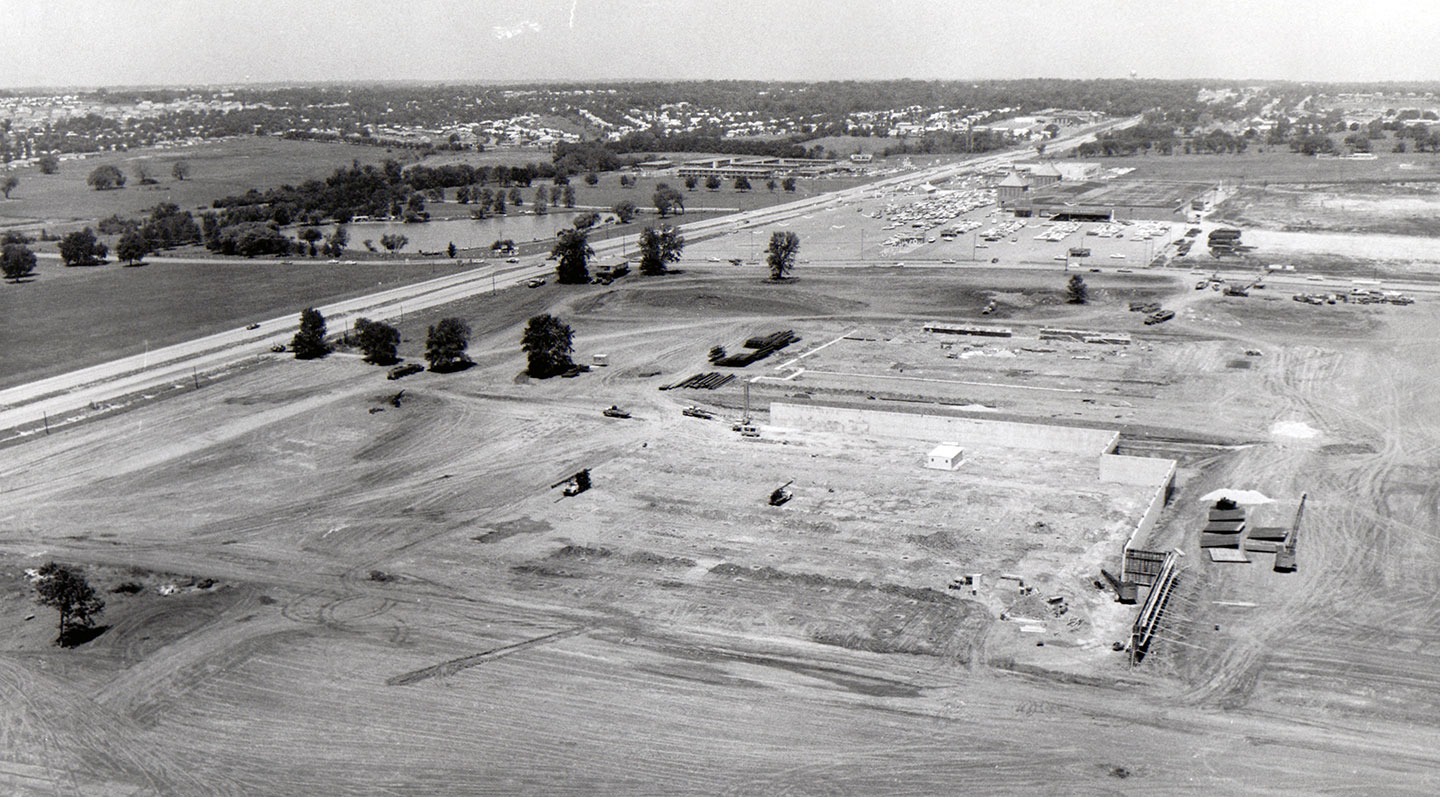 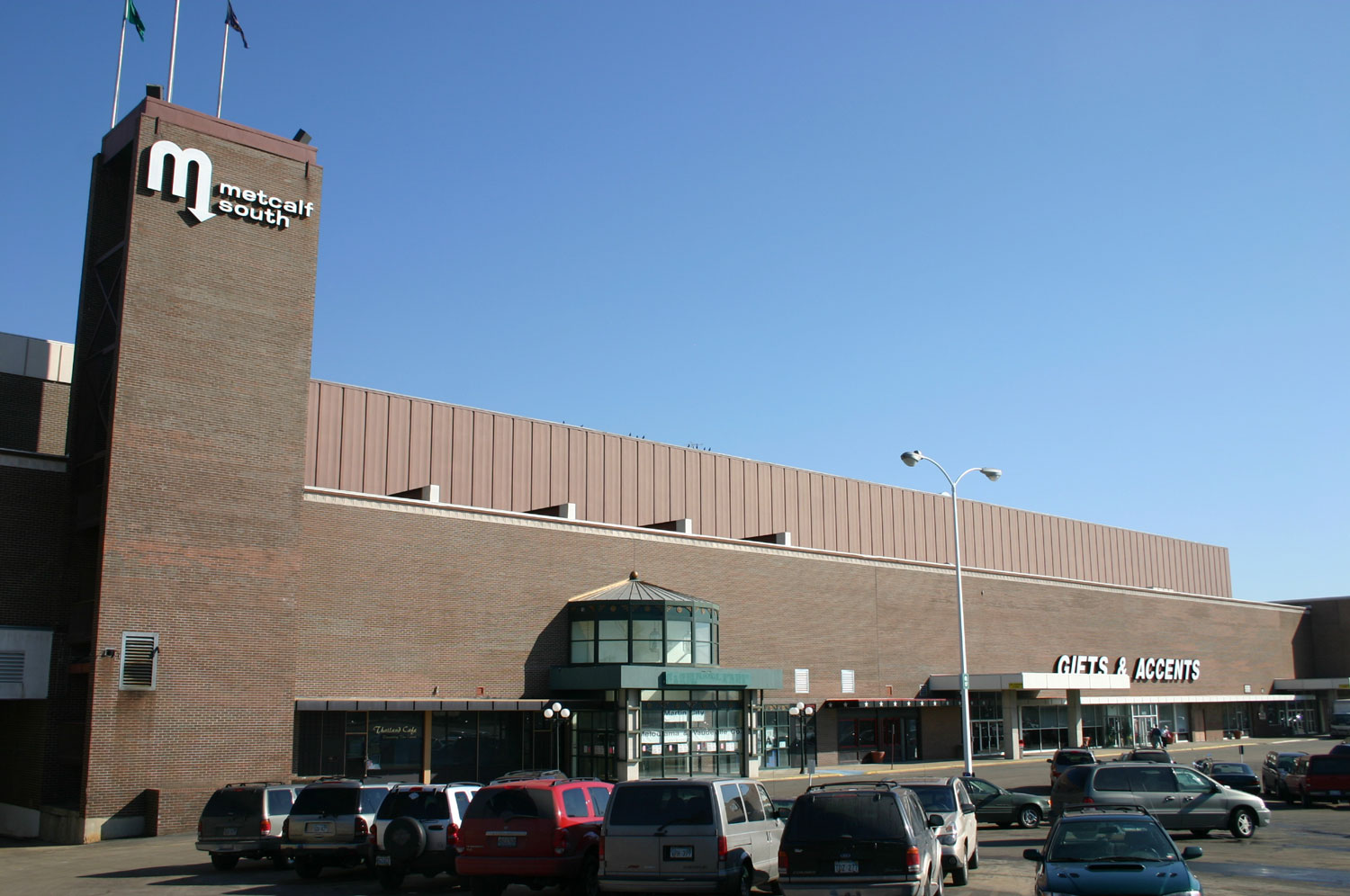 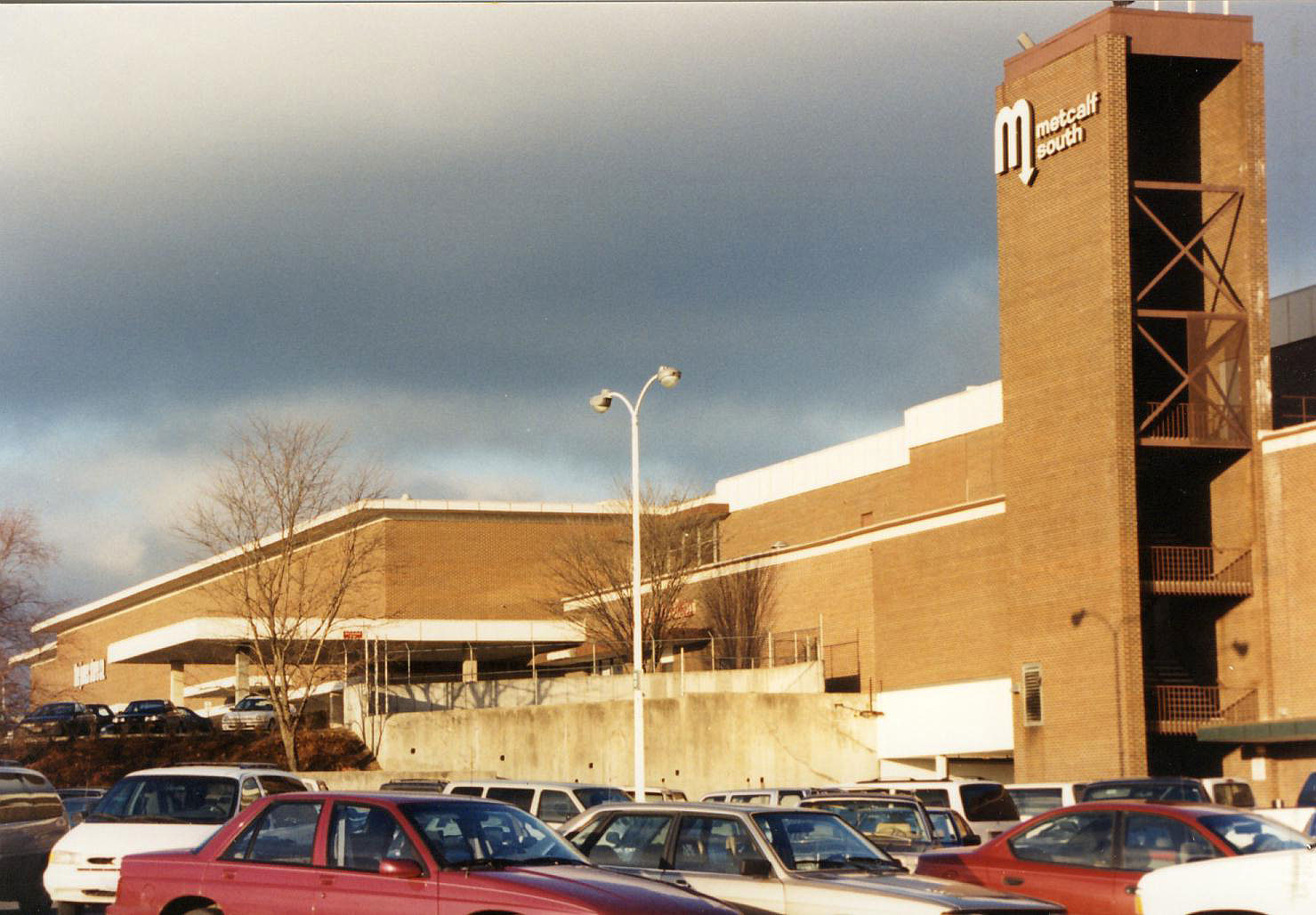 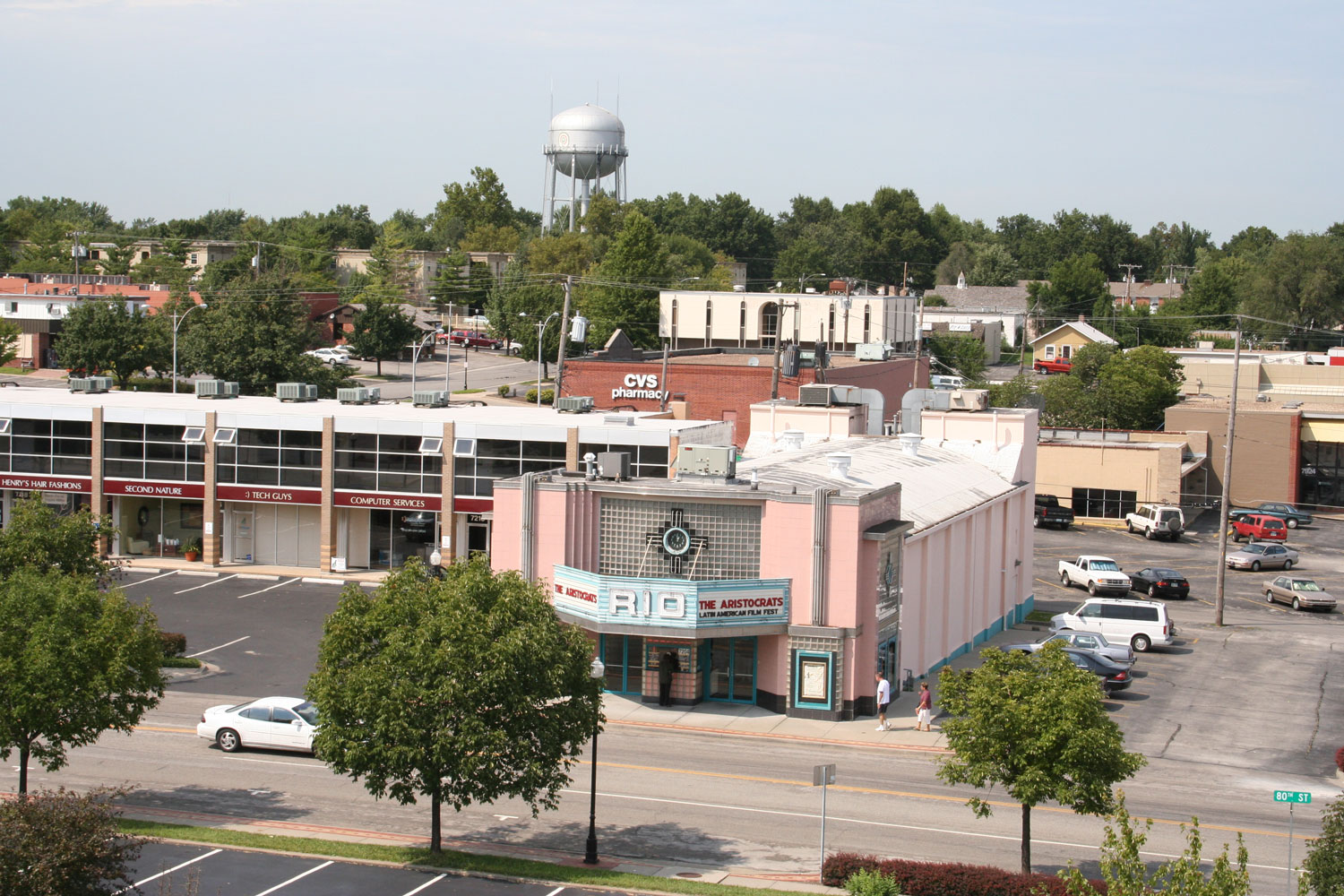 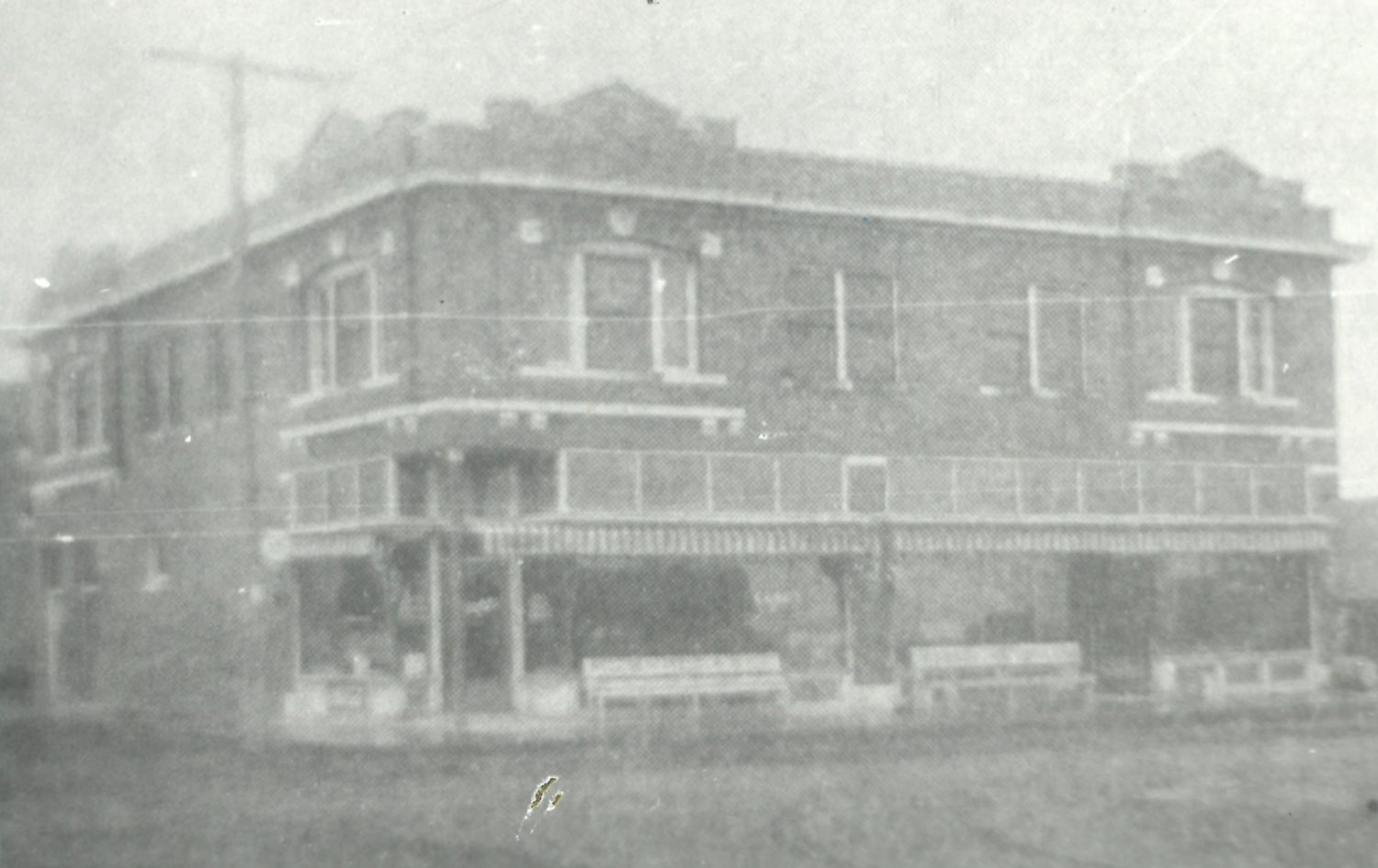 The Voight Building, which stood at 7944 Santa Fe Drive and caught fire twice before it was rebuilt as the one-story building currently at the northwest corner of 80th and Santa Fe Drive, 1910. 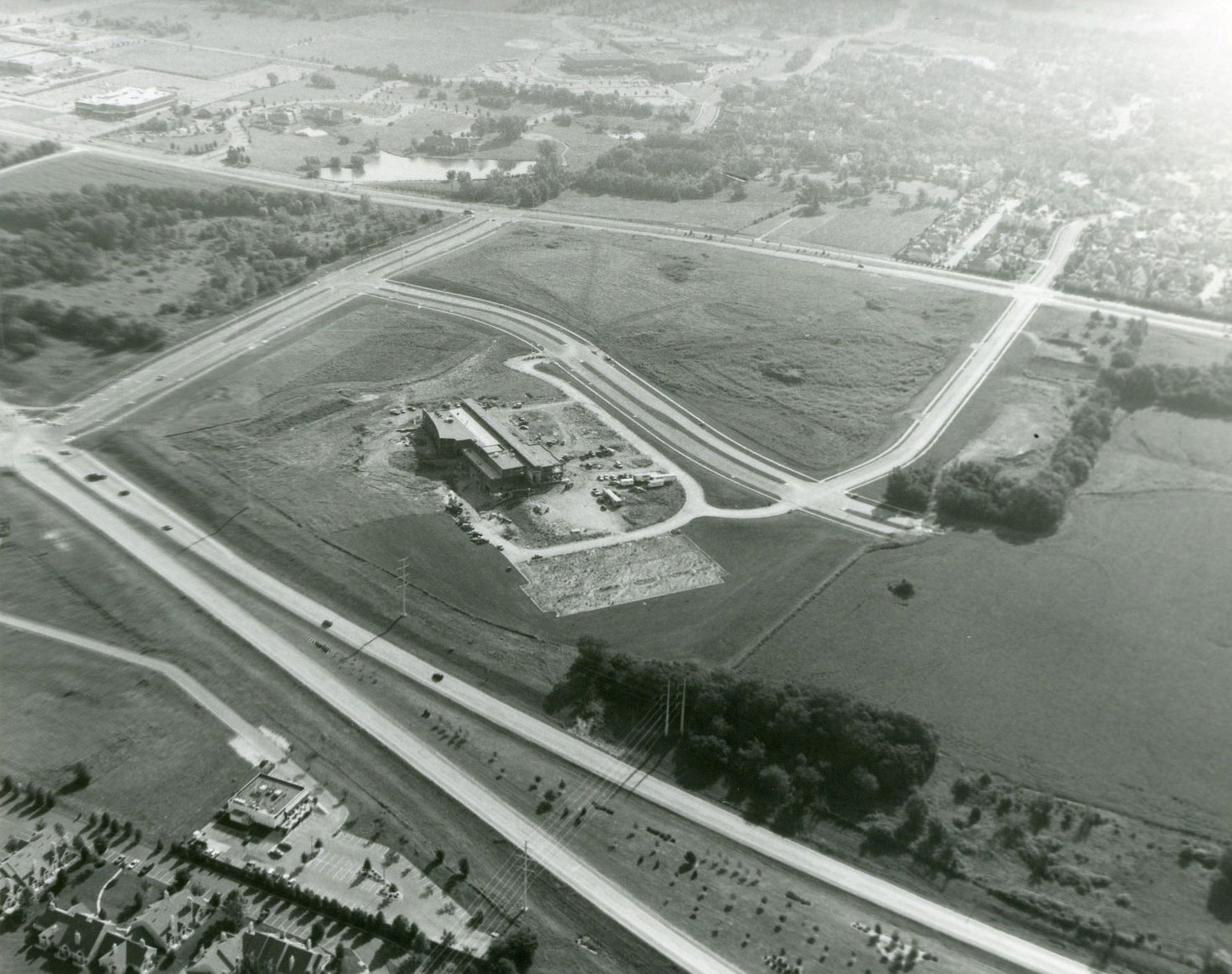