Council Member Scott Mosher was elected to the council in November of 2021.

Mosher, a father of 5, has lived in the Olathe/Overland Park area since 1989. Scott was married to his wife Shellee for 41 years till her passing in March of 2021. Scott’s son Michael was an Overland Park Police Officer who lost his life in the line of duty in May of 2020.

Council Member Mosher grew up on Okinawa, leaving there, having spent 10 years in Japan. He then moved to Las Vegas, Nev. where he graduated from Rancho High School in North Las Vegas. He attended Clark County Community College and received his Auto Mechanics Certificate while working for the Army and Air Force Exchange Service. He joined the North Las Vegas Police Department in 1975 and spent 4.5 years as a Reserve Police Officer. He then joined the Henderson Police Department as a Reserve where he worked for 9 years, until moving to Olathe.

He began his professional career in 1975 as an Auto Mechanic, also working as a maintenance person for McDonalds Corporation, cleaning a restaurant overnight. Mosher spent 27 years with McDonalds, climbing the corporate ladder. He served in various management positions, including Regional Training Manager and Operations Manager, where he was responsible and successful for managing a profit center achieving over $60 million in sales. Mosher worked in the food business for 43 years, finishing his career with Wendy’s.

Mosher and his son Michael owned Tactical Simulation Solutions, teaching firearm classes for almost 10 years. Getting back to his roots, he currently is Lead Firearms Instructor at Frontier Justice in Lee’s Summit.

Mosher will bring a wealth of business experience and experience in public service to his position as a council member. Mosher believes that our city government needs to serve the people that put us all in office, not special interest groups. He is committed to listening and acting in the interests of all the citizens of Overland Park. 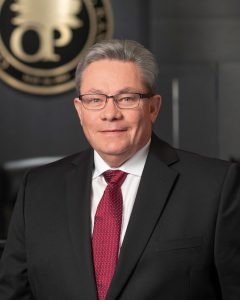