The City is currently performing maintenance on opkansas.org. Some attachments are temporarily unavailable. Thank you for your patience while we work to solve this issue. 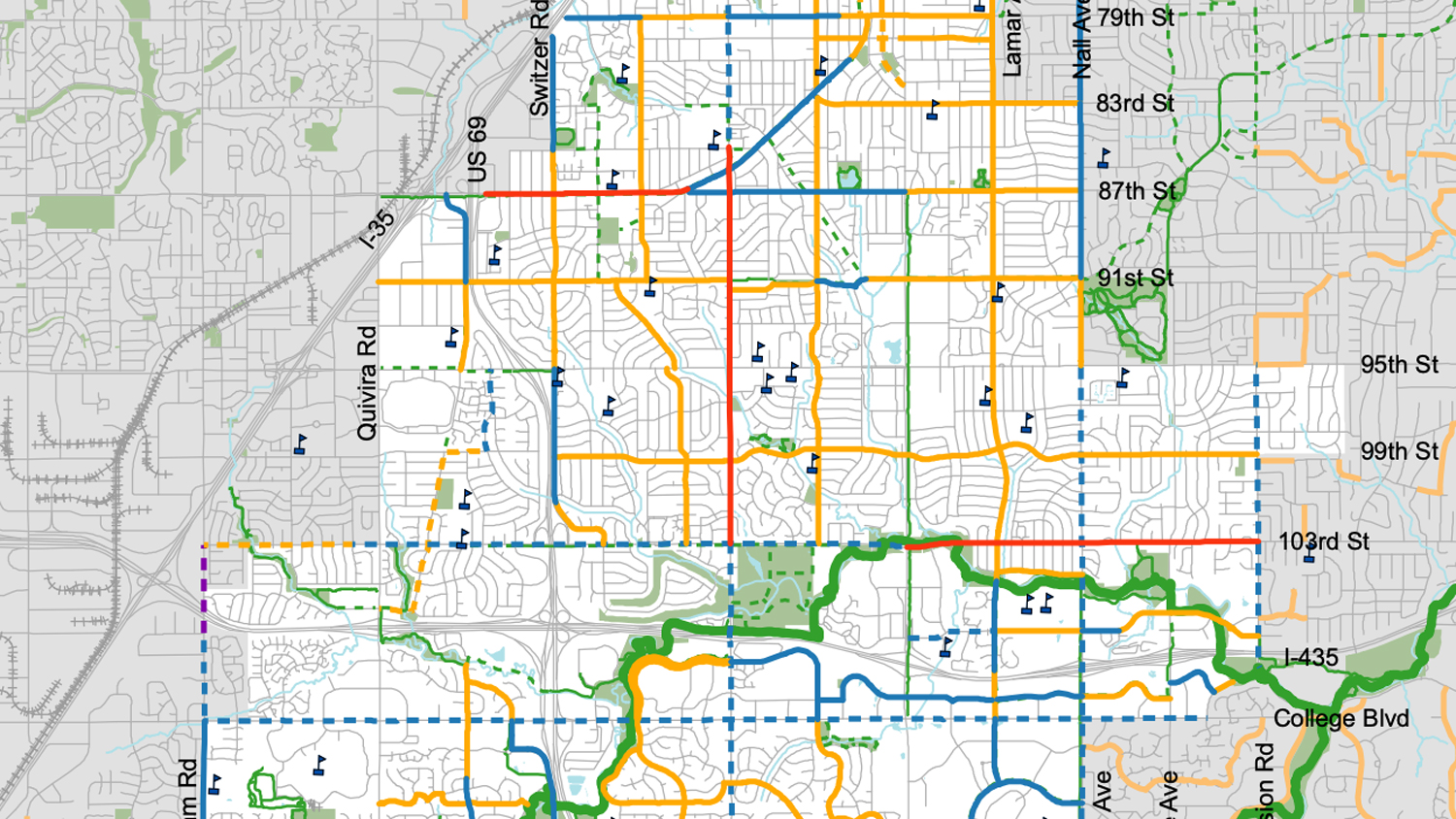 If you’re thinking about ditching your car or truck, even if it’s just for a dinner out or to run an errand, there are options to traveling Overland Park without a vehicle. Skip the gas station and read below to plan your next car-less trip:

Eight RideKC routes serve Overland Park. The 403, one of the most popular routes in Overland Park, begins running during the 5 a.m. hour and doesn’t stop until after 7 p.m. Residents can ride from Johnson County Community College to 75th Street in just over 20 minutes.

This is in addition to the Johnson County Micro Transit system, an affordable ride-hailing transportation option. You’ll share a van with others going the same direction, and while it’s technically still a vehicle, you’ll be doing your part to reduce cars on the road. In addition to serving a large part of Overland Park Monday-Saturday, 6 a.m.-8 p.m., Micro Transit runs on Saturdays to and from the Farmers’ Market thanks to an interlocal agreement between the City and RideKC.

Overland Park currently has 163 miles of bicycle infrastructure, including 61 miles of dedicated bike lanes and 67 miles of sharrows. Residents can choose several different streets to ride from the City’s northern boundary at 47th Street, all the way to approximately 203rd Street, and to many destinations east-to-west along the way. Most routes include dedicated bike lanes, and many include sharrows.

Check out the Bike Lane Map to see everywhere you can go on two wheels.

The City has more than 800 miles of sidewalks, on thoroughfares and neighborhood streets.

Developers are required to build sidewalks when constructing new homes, which allows pedestrians access to amenities and neighborhoods as well. Sidewalks are also added when streets are rebuilt through the neighborhood street reconstruction program.

If you’re not running an errand or trying to get to a class, consider a walk, jog or ride on the extensive bike/hike trail system. Hop on at more than a dozen trailheads and enjoy a relatively level, flat and wide paved trail open to non-motorized traffic only. You can even connect to nearby cities’ bike/hike trails and take the system all the way into Kansas City, Mo.

The City is preparing for the 2022 Comprehensive Plan review right now.

The review will gauge the desires of the community, evaluate existing and emerging issues in the City and align the Comprehensive Plan with Forward OP, the City’s community vision. The review will include extensive public engagement and and focus on implementation steps.

Together with the cities of Merriam, Overland Park, Mission, and Kansas City, Kan., the City is studying transportation modes along and around Merriam Drive in northern Overland Park, including vehicular traffic, bicycle and pedestrian infrastructure, and public transit.

There’s still time to get involved on this study as well. Visit the project page to learn more.

You can get involved in helping a central part of the city become a friendlier place for non-drivers. The City is currently studying non-vehicular transportation options in the OPCentral district, and we need your feedback.

Visit the OP Central page to take the survey and help us gauge mobility options that have worked in other cities. You can learn more about upcoming public meetings online as well.

College Boulevard went on a “road diet” in 2020 to provide more options for pedestrians and cyclists to move about that area. This was an early step in implementing a plan to improve walkability and attractions in this area.

Additional items already under consideration or in implementation phases that promote multimodal transportation in Overland Park include: