Each year, the City completes a number of public road construction and improvement projects. These projects make safer streets with better traffic movement and streamline the maintenance of public property.

Occasionally, projects will cause some traffic delays and temporary disruptions. This page contains details about street, bridge, stormwater, and other under construction projects that may impact traffic in the city.

The annual project map shows information about all Public Works projects scheduled for the year.

To see much of this information in map format, visit one of the interactive maps below.

The design and construction of these projects such as thoroughfares, residential streets, bridges, traffic signals and storm water drainage are paid for with money dedicated to the Capital Improvements Program. 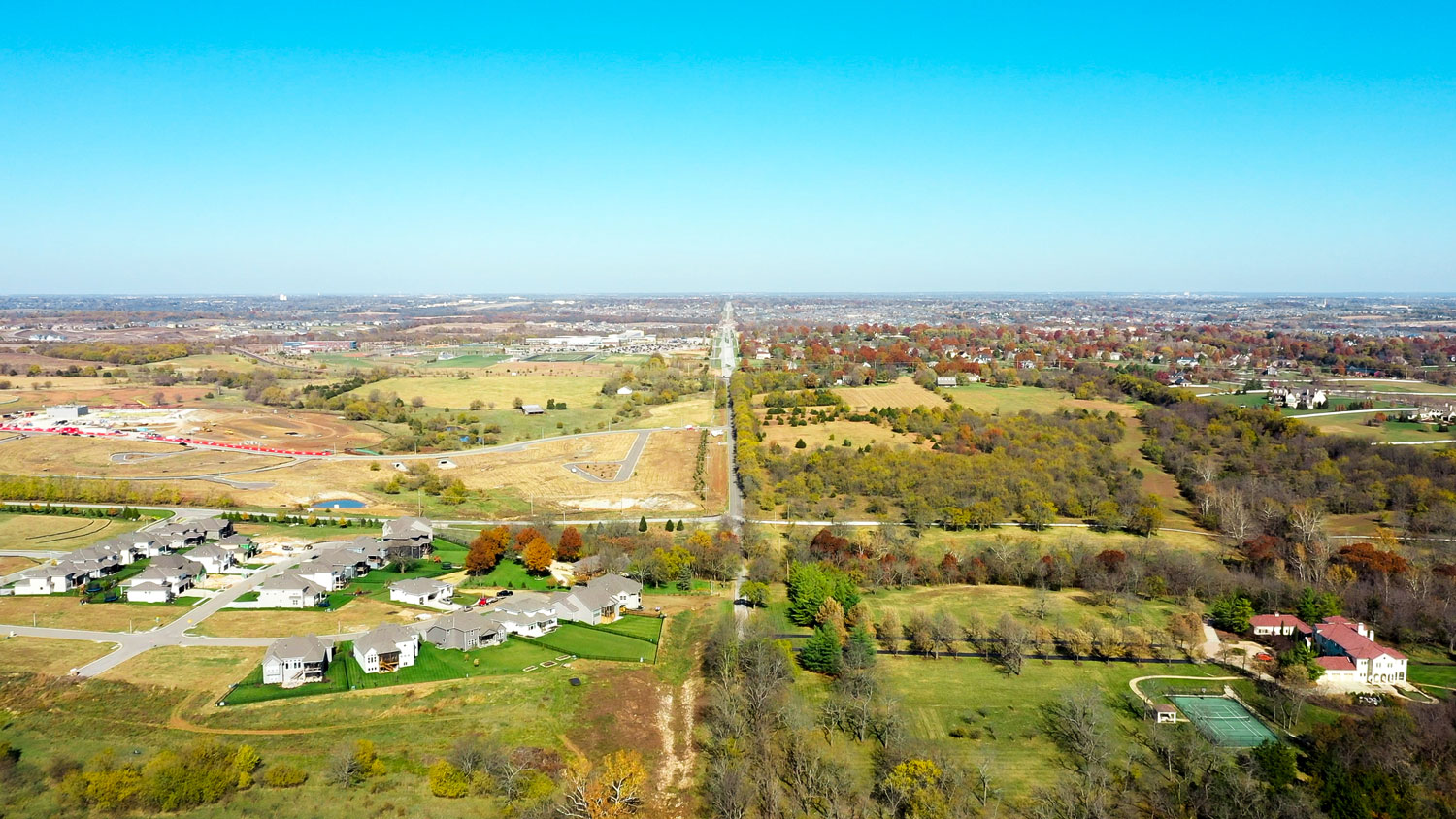 This project will construct two bridges connecting Quivira Road from 183rd to 187th and reconstruct Quivira Road from 179th to 183rd. The new roadway will include a two-lane undivided road with a shoulder, bike lane and a roundabout at 179th Street. A multi-use trail, street lighting, curb and gutter, storm sewers and landscape restoration are also included.

Schedule: This project is currently in the design phase. Construction is expected to begin in 2024. 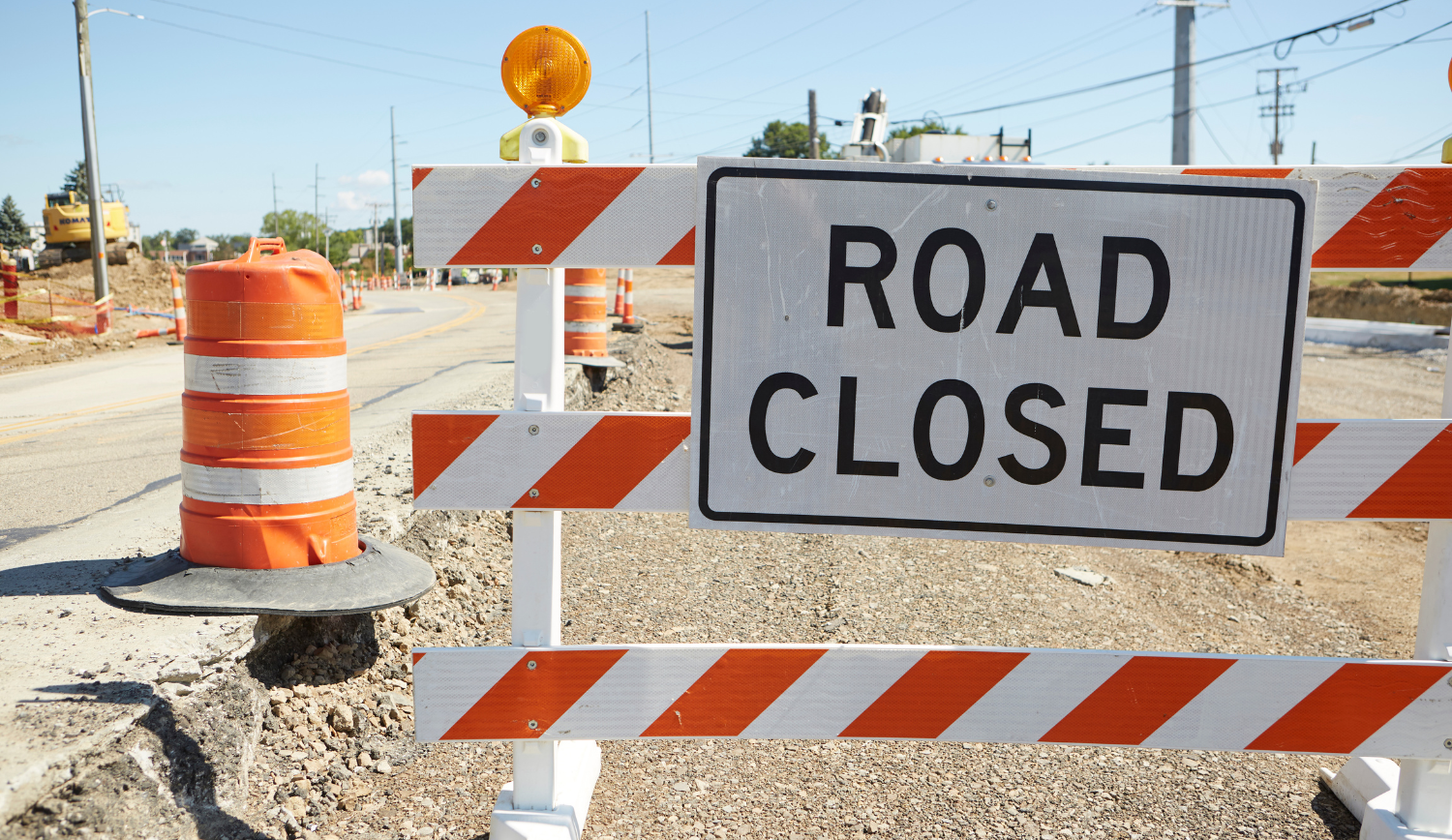 The project will include full removal and replacement of the existing pavement, sidewalk, curb and gutter, streetlights, and storm sewer. The new pavement will be concrete instead of asphalt. Visit the project website to learn more.

Schedule: Utility relocations for this project are starting in fall of 2022. Street reconstruction will begin in spring of 2023. The project is expected to be complete in fall 2023.

Schedule: Utility relocations for this project are starting in fall of 2022. Street reconstruction will begin in spring of 2023. The project is expected to be complete in fall 2023. 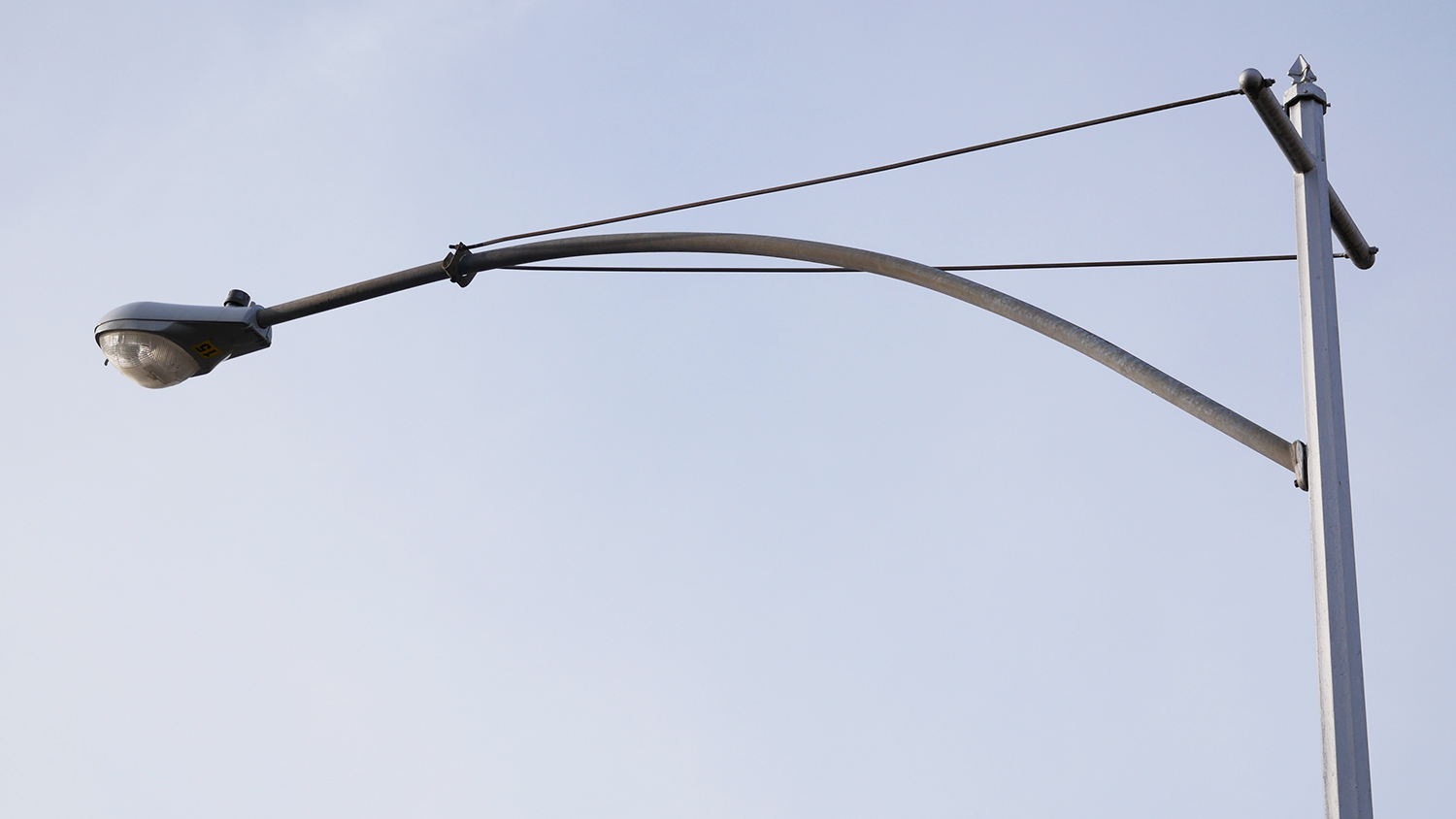 The City is replacing streetlight bulbs along major thoroughfares with more energy efficient LED bulbs. This follows an effort to convert all streetlights to LEDs in neighborhoods. The change will reduce energy consumption and save the City on energy costs.

Schedule: This project is in progress and is expected to be complete in 2022. 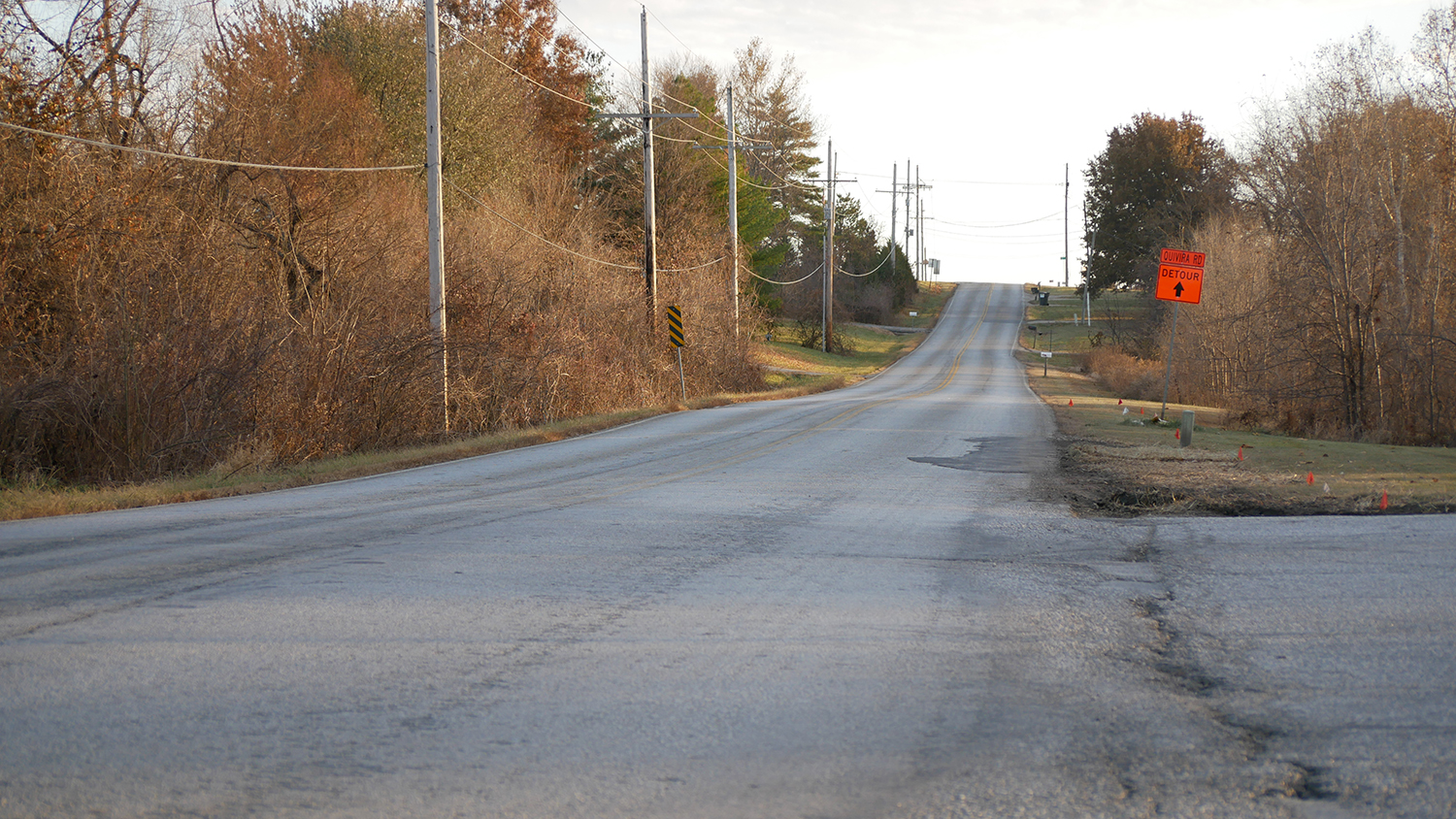 The City will reconstruct Switzer from 159th to 167th Street, including a two-lane undivided roadway with a shoulder, a bike lane and a roundabout at 167th Street.  A sidewalk, multi-use trail, street lighting, curb and gutter, storm sewers and landscape restoration will also be included.

Schedule: Construction is anticipated to begin in 2022. 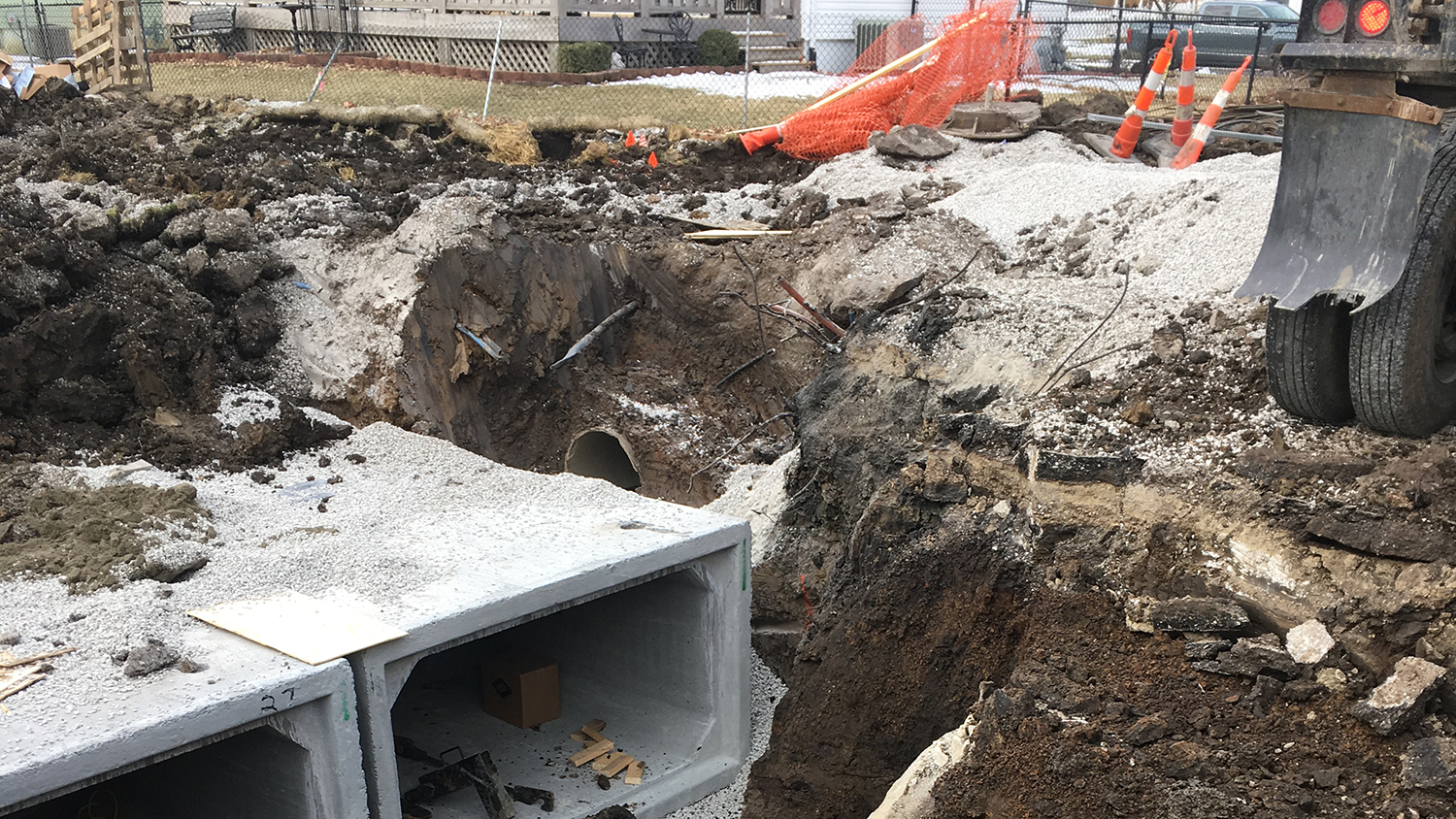 The City will replace aging and deteriorating storm sewer infrastructure for several locations in Overland Park:

Schedule: Construction is expected to begin in summer of 2023. 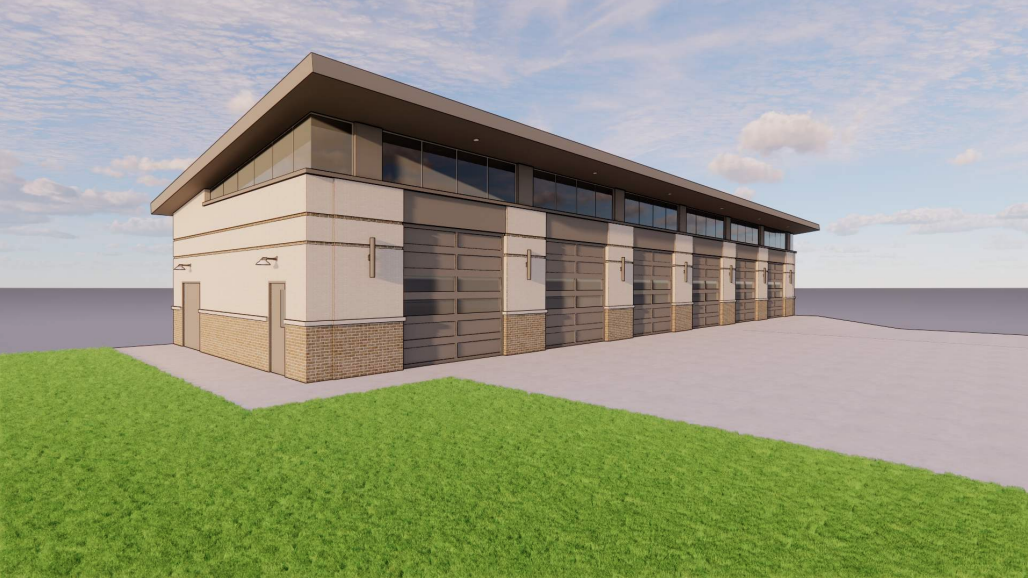 This project includes construction of a new police storage building at Sanders Justice Center. The building will be located southwest of the parking lot and will serve as vehicle storage for the Overland Park Police Department.

Schedule: This project is expected to be complete in fall 2022. 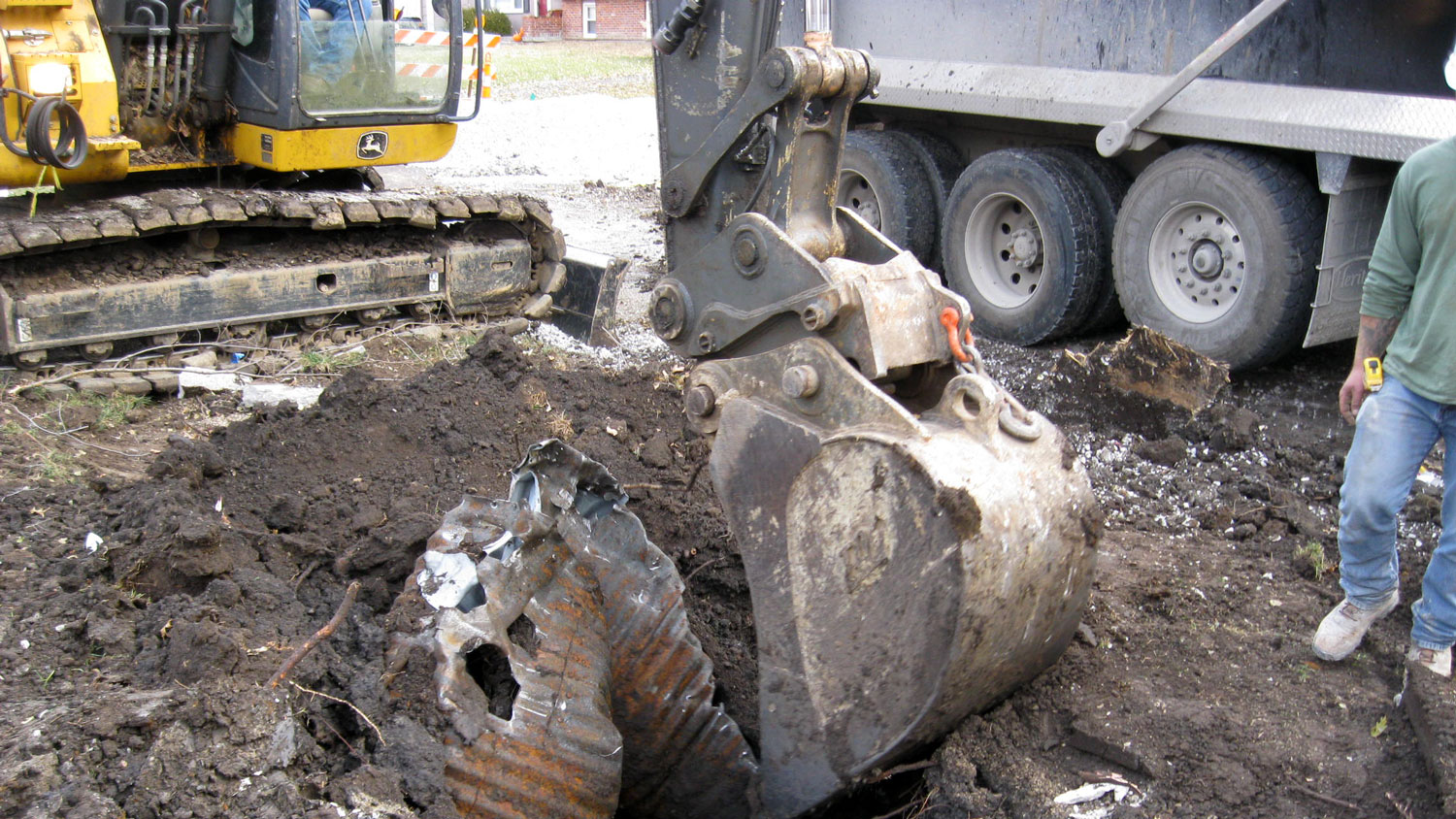 The City will replace deteriorated storm sewer pipe and inlets along Johnson Drive, from Lowell Street to Metcalf Lane. The traffic signal at Johnson Drive and Metcalf Lane will be reconstructed as part of this project.

During construction, daily lane reductions and closures will affect the following streets: 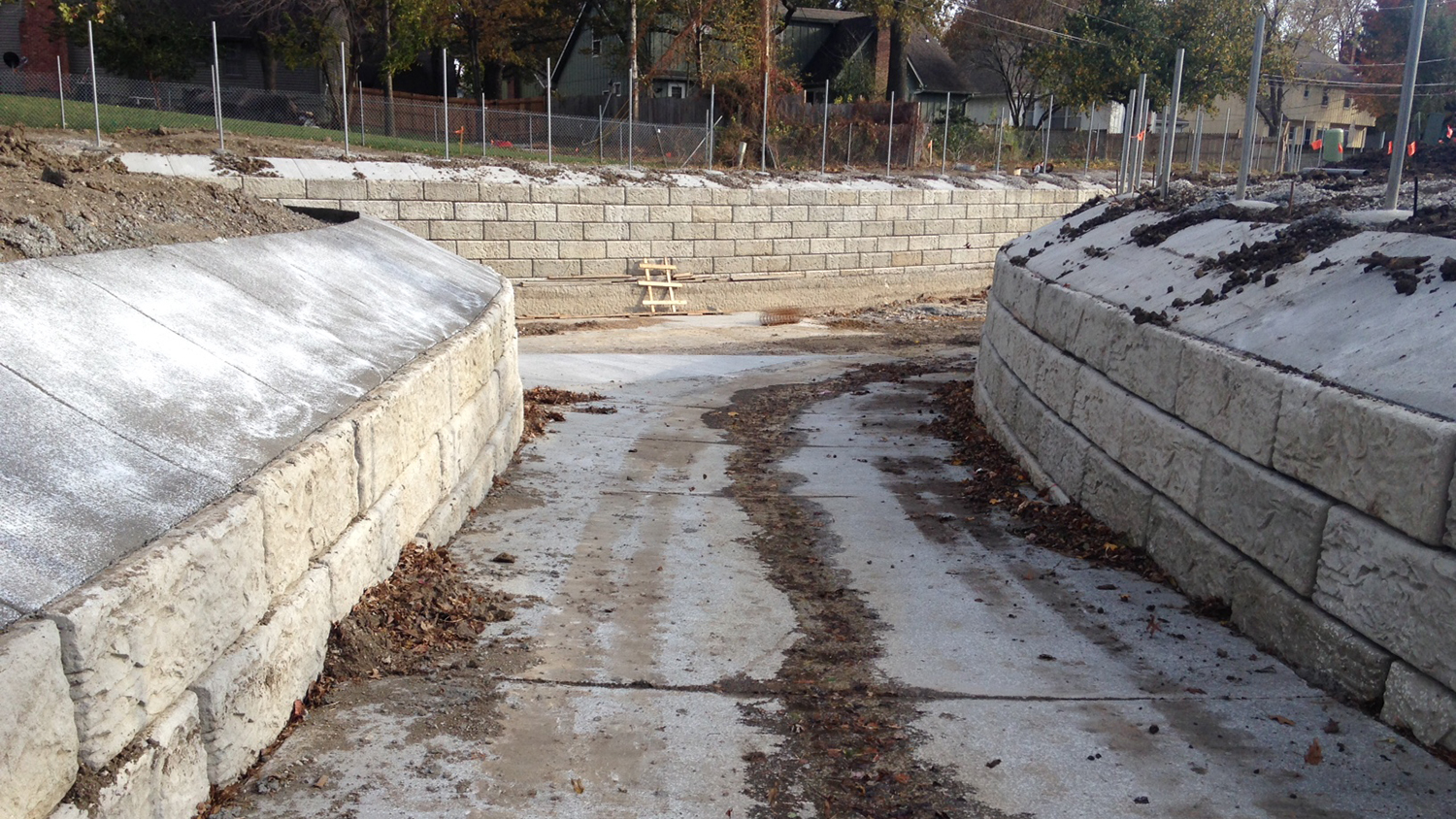 This project will alleviate street and structure flooding and includes a replacement of the existing concrete ditch liner, roadway and storm sewer improvements, and relocation of the sanitary sewer. The improvements extend from 101st to Knox Drive, between Connell Drive and England Drive. Find additional information about the project here. 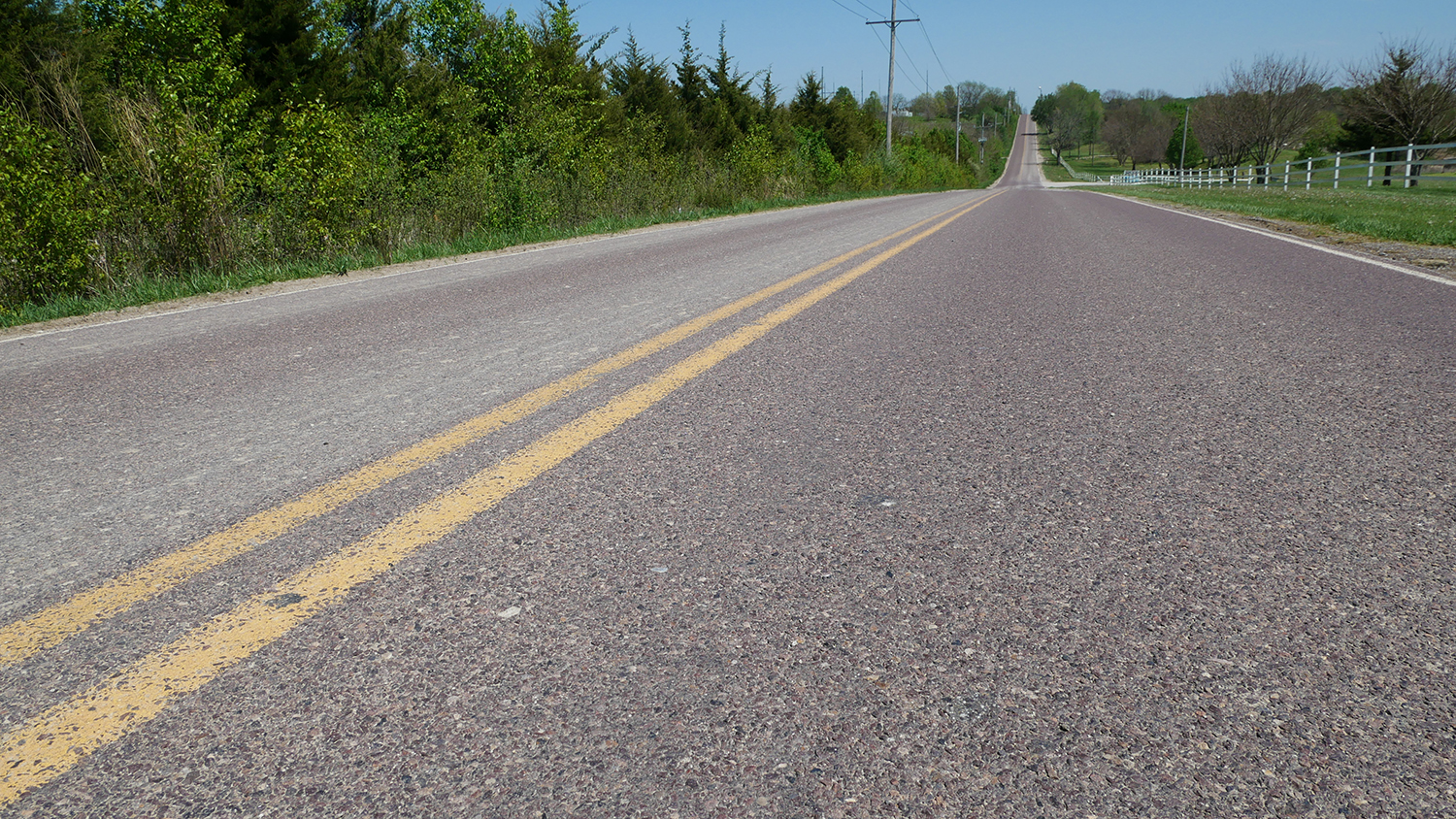 The City will reconstruct 167th Street, from Switzer to Antioch Road, to include a two-lane undivided road with a shoulder, a bike lane and a roundabout at Antioch Road. A sidewalk, multi-use trail, street lighting, curb and gutter, storm sewers and landscape restoration will also be included.

Community Engagement: The City held two public meetings in preparation for the project, on May 27, 2021 and March 1, 2022.

Schedule: This project is currently in the design phase. Utility relocations are scheduled to be completed in 2022. Construction is anticipated to begin in 2023. 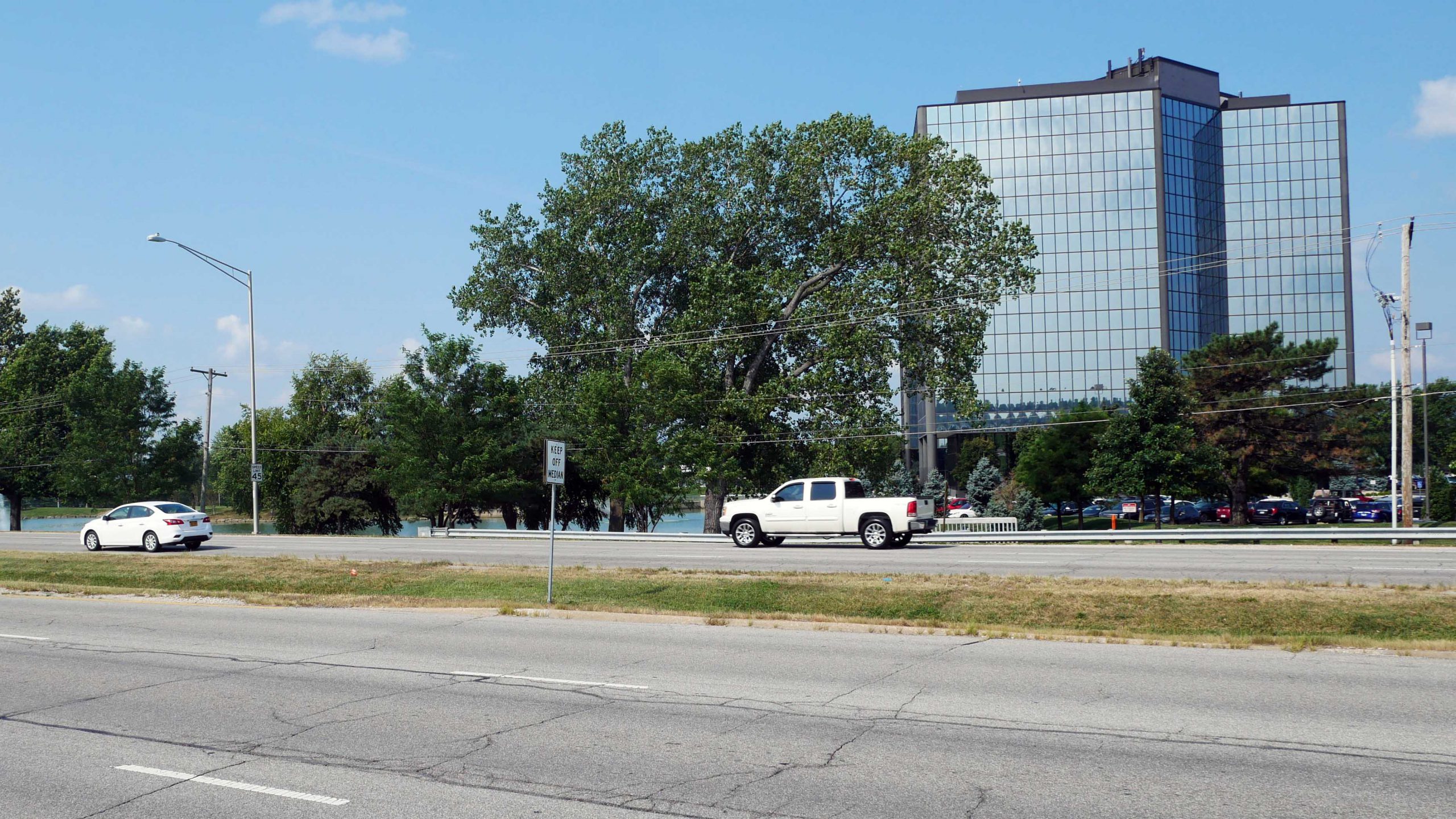 This project includes improvements to Metcalf, including a mill and overlay, raised medians with landscaping and irrigation, curbs and gutters and new storm sewer improvements. New decorative traffic signals and street lighting will be installed with this project, and overhead power lines will be buried.
These improvements consider and address safety, access for local drivers during construction, impacts to adjacent property and existing utilities, stormwater drainage and more.
Project Manager: Tony Rome, 913-895-6001, tony.rome@opkansas.org
Schedule: This project is currently in the design phase. The City is acquiring easements in 2022. Utility relocations are scheduled to begin in 2022. Construction is scheduled to begin in 2023.
Community Engagement: The City held two public meetings in preparation for the project. An additional public meeting for neighbors and Overland Park residents will be held in 2023 when a construction schedule is prepared. 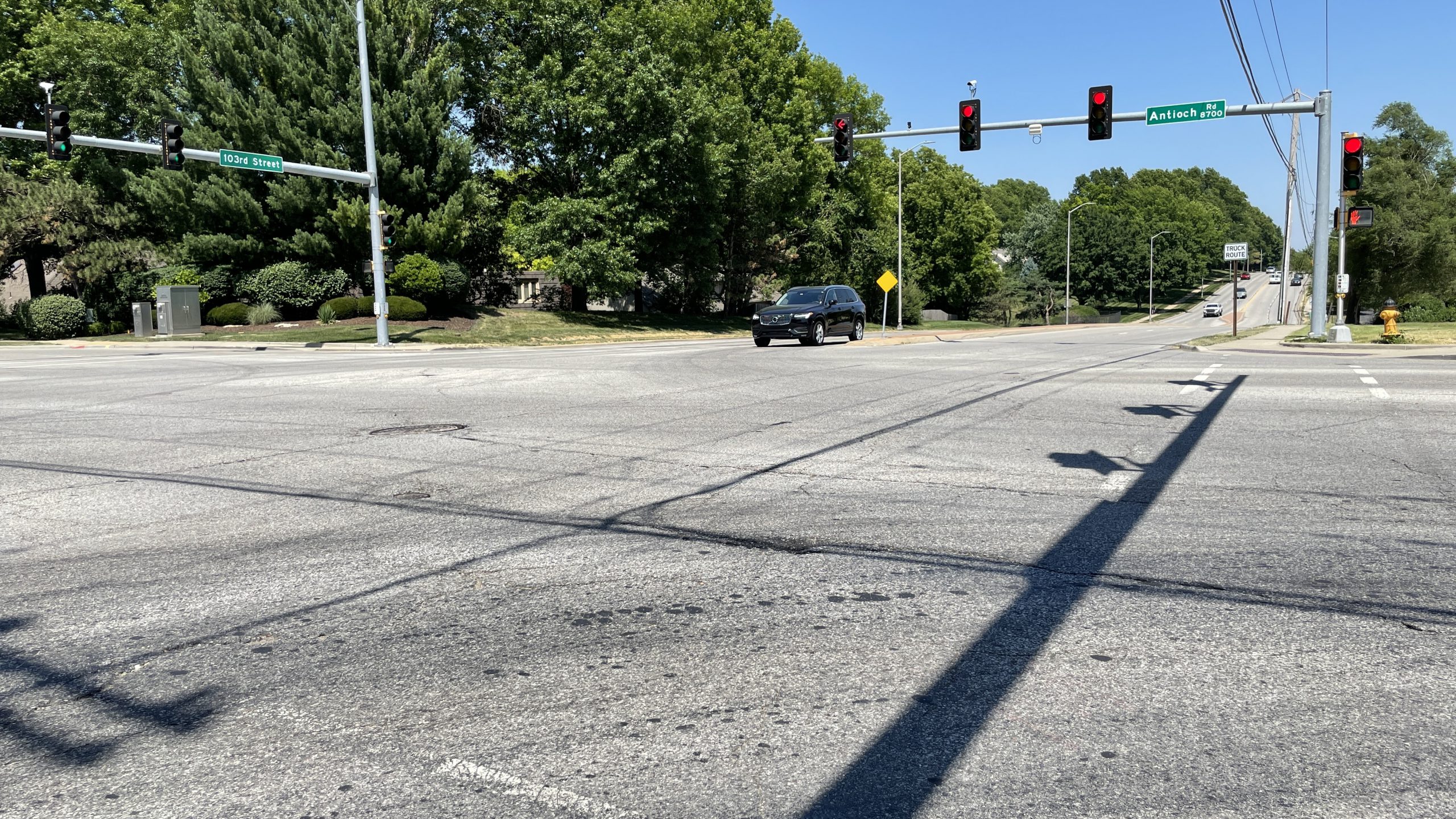 The City will make improvements to the area of 103rd and Antioch as part of the Brookridge Redevelopment Agreement. This project will be completed at the developers expense to accommodate changing traffic patterns and to help comply with zoning stipulations in the area.

The following improvements are included in the project:

Schedule: Construction is anticipated to begin in 2023. 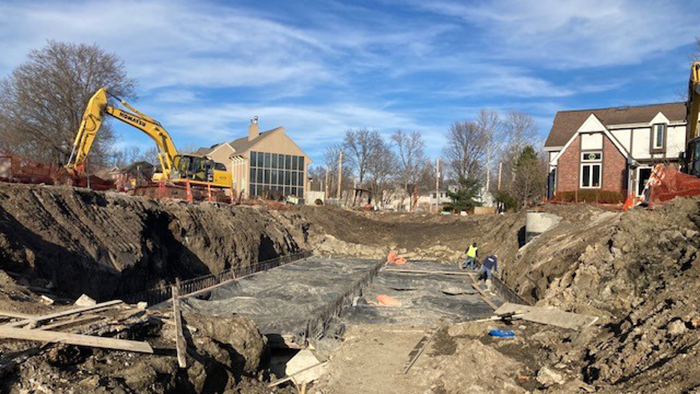 This project will alleviate street and structure flooding and includes the replacement of the existing ditch liner, road, storm sewer improvements, and relocation of several utilities. The improvements will be from Knox Drive to 99th Terrace. Find additional information about the project here.

Schedule: This project is currently in the design phase. Construction is expected to begin in spring 2023. 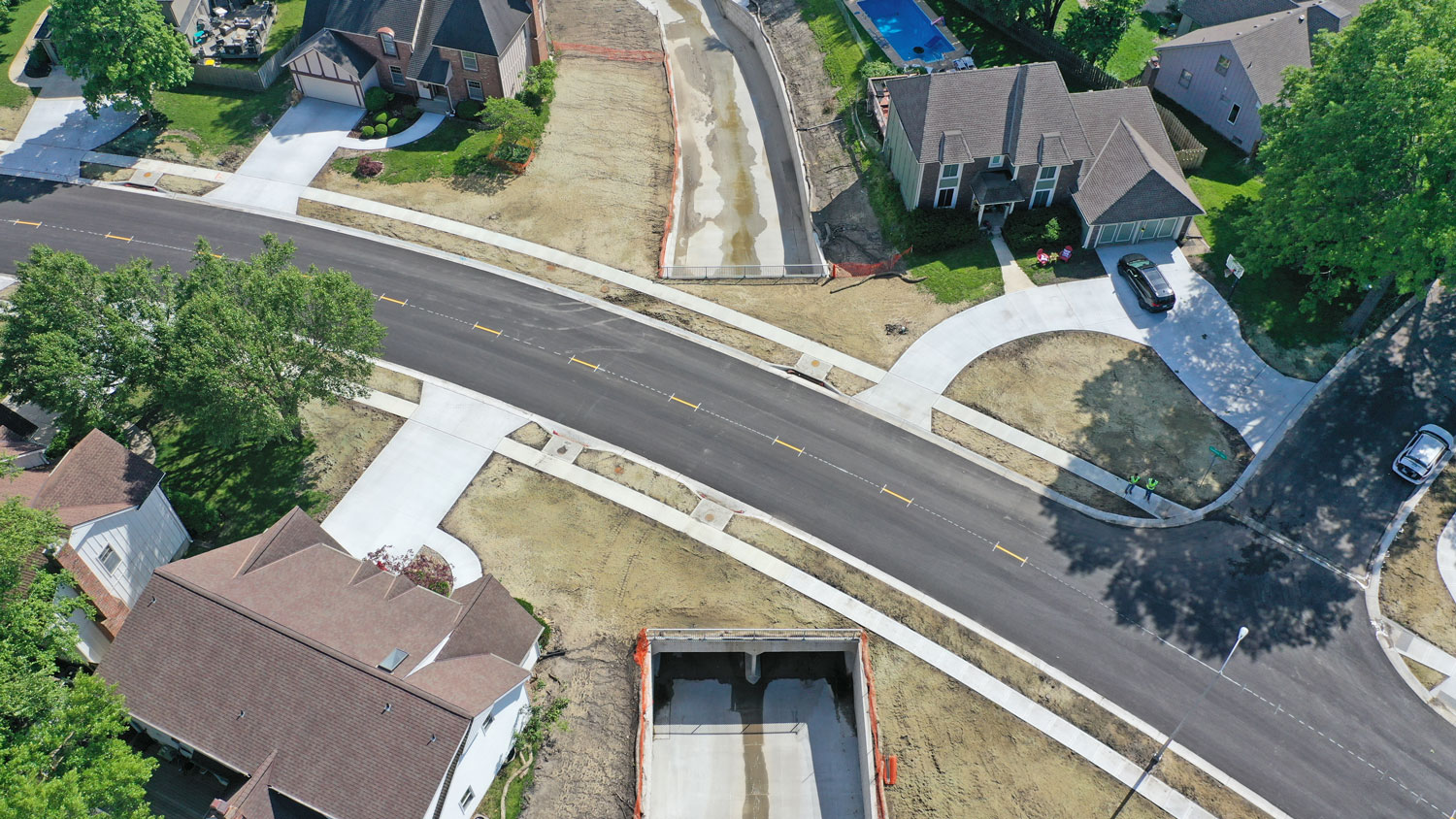 This project is a continuation from a previous storm drainage improvements. It will alleviate street and structure flooding and includes the replacement of the existing ditch liner, road, storm sewer improvements, and relocation of several utilities. The improvements will be from 99th Terrace to 97th Terrace between Knox Drive and Connell Drive.

Schedule: This project is currently in the design phase. Construction is expected to begin in 2024. 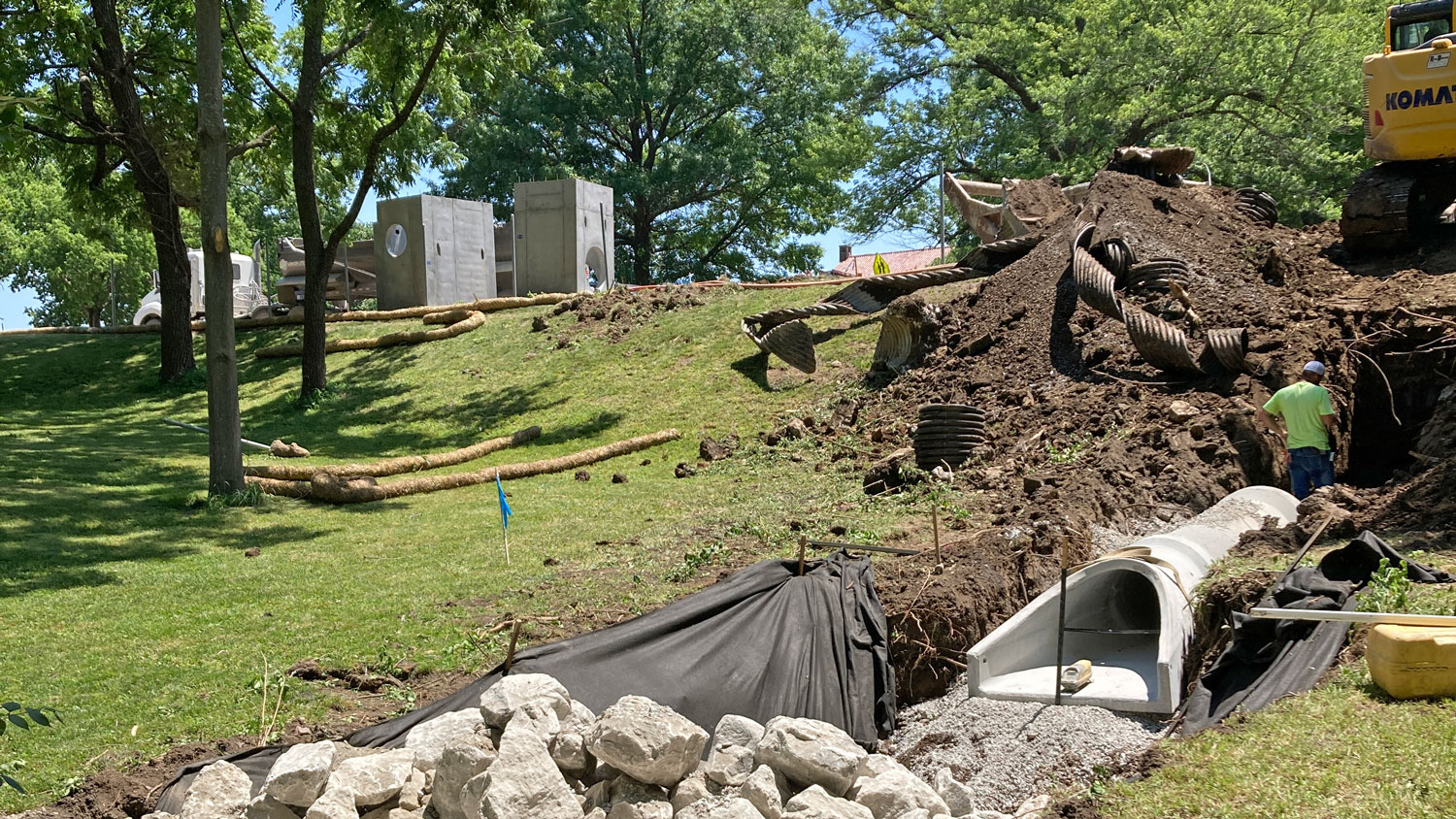 This project consists of the repair and replacement of aging and deteriorating storm sewer infrastructure at the following locations listed below:

Schedule: Construction is expected to begin summer of 2023 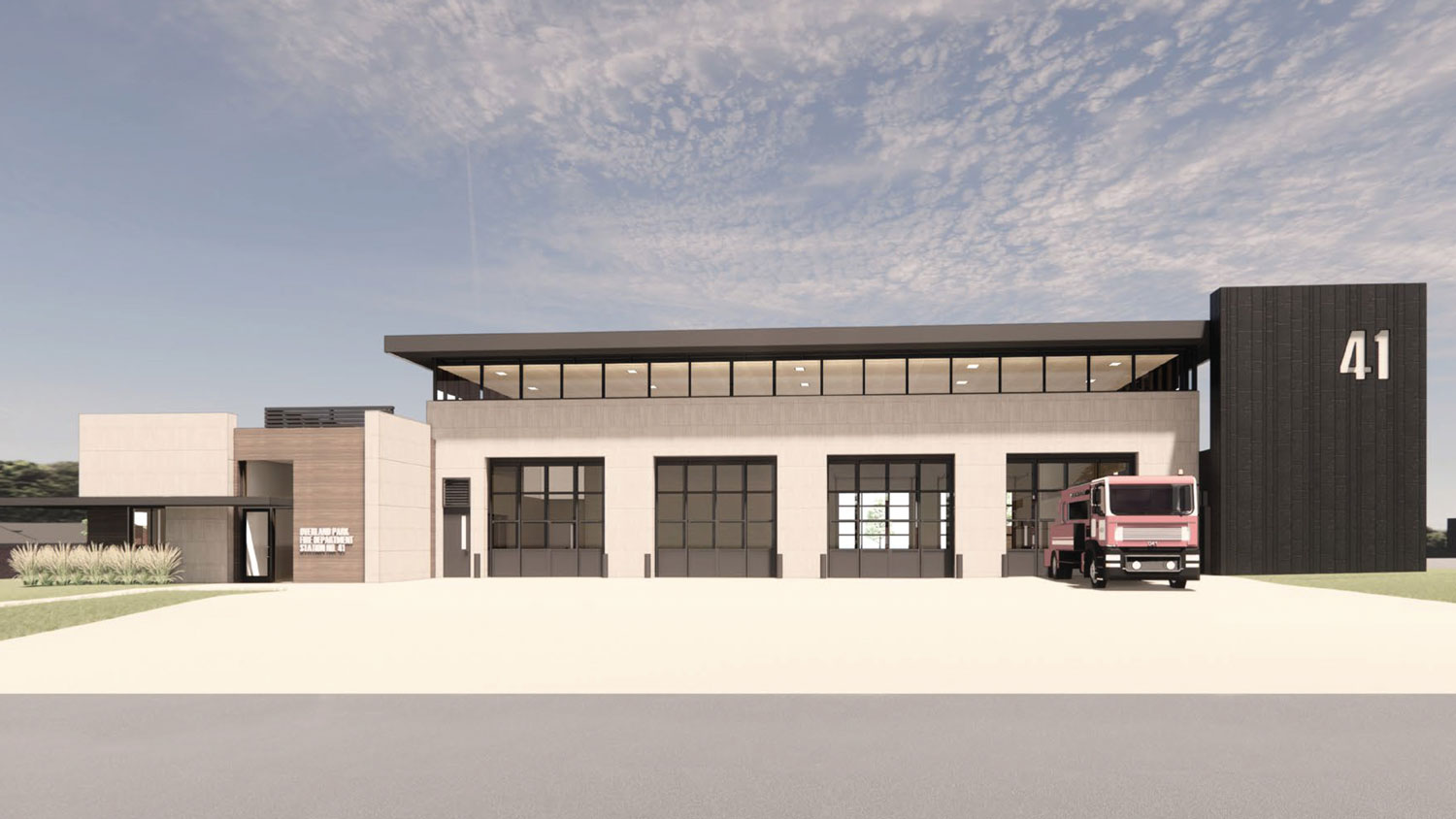 The City will reconstruct Fire Station 41, located at 75th and Conser. The station has operated for nearly 50 years and will be replaced with a state of the art facility designed to house 12 staff members and six fire and EMS vehicles.

Schedule: This project is expected to begin construction in Spring 2023 and be complete in mid-2024. 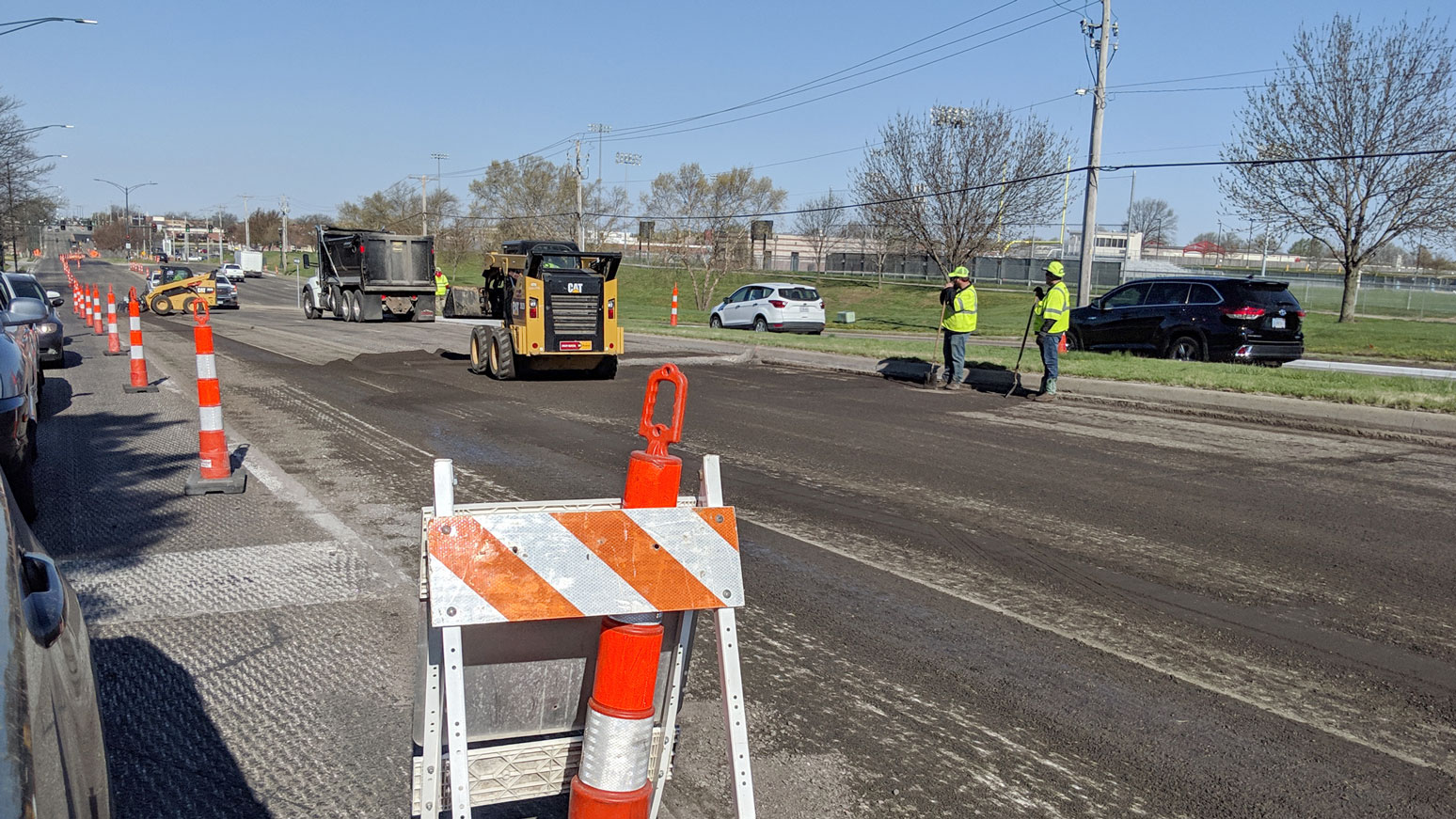 A mill and overlay removes the top two to three inches of the asphalt street. Milling removes the old surface and helps to restore the street to its original shape. Crews then overlay new asphalt. Curb and gutter, sidewalk, storm sewer and commercial driveway repairs are included as part of the project. Thoroughfare roads are treated with this maintenance every 10-12 years; and residential streets are treated at least 30 years after they were newly constructed. 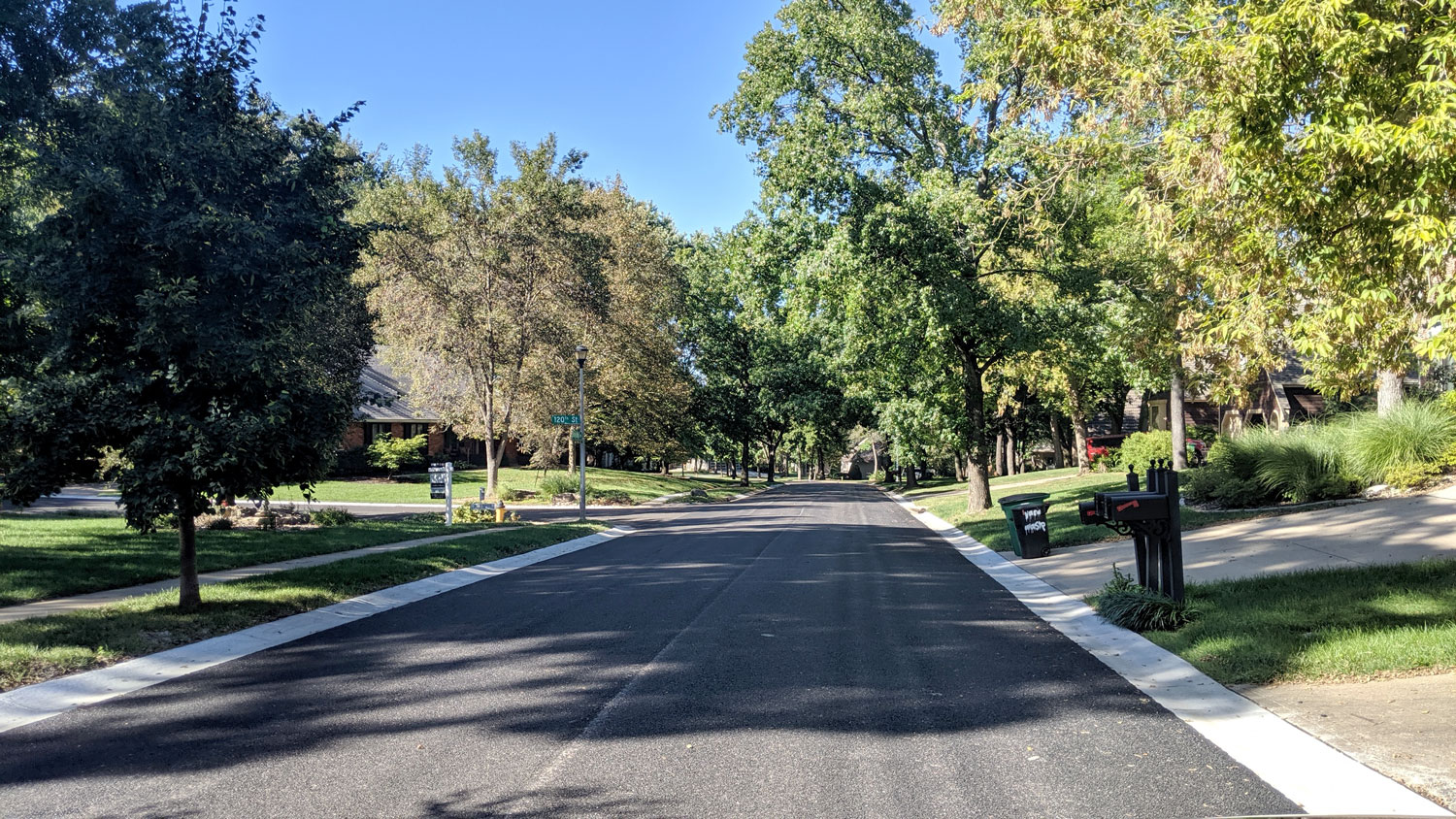 This process removes the top five-eighths of an inch of existing pavement from a street. Crews then apply an ultra-thin bonded asphalt, which seals the pavement, and prolongs the life of the street. Curb and gutter, sidewalk, storm sewer and commercial driveway repairs are included as part of the project. Thoroughfare roads are treated approximately every 8-10 years.

Chip seal is used on residential streets to extend the life of aging streets until crews can overlay the pavement.

Chip seal extends the life of your street and is relatively quick to apply, reducing the disruption to the neighborhood. It creates a skid-resistant surface that can be used right away. Chip seal keeps streets in good condition by sealing cracks and preventing water from creating new issues.

Compared to other project types, chip seal provides a better value to taxpayers and residents because it lasts longer and is less expensive.

Chip seal typically happens during the summer. City staff notify residents with mailed postcards and door hangers before chip sealing begins. These notifications have contact information included so you can call with questions or concerns. Streets remain open and you will have access to your home.

The chip seal process involves spraying a mixture to seal cracks, spreading small chip rocks on the mixture, and rolling the chip rocks to embed them into the street surface.

On the day the work is scheduled, do not park in the street. You can drive slowly on the chip sealed surface during the curing process, but do not brake or turn the wheels of your vehicle sharply within the first few hours of application.

After chip seal is applied, street sweepers will sweep five times to reduce loose rock. Do not park on the street during that week so sweepers can remove the loose rock.

Street sweeping is completed several times after chip seal is applied. Use the map linked below to see recent chip seal locations and their sweeping status. 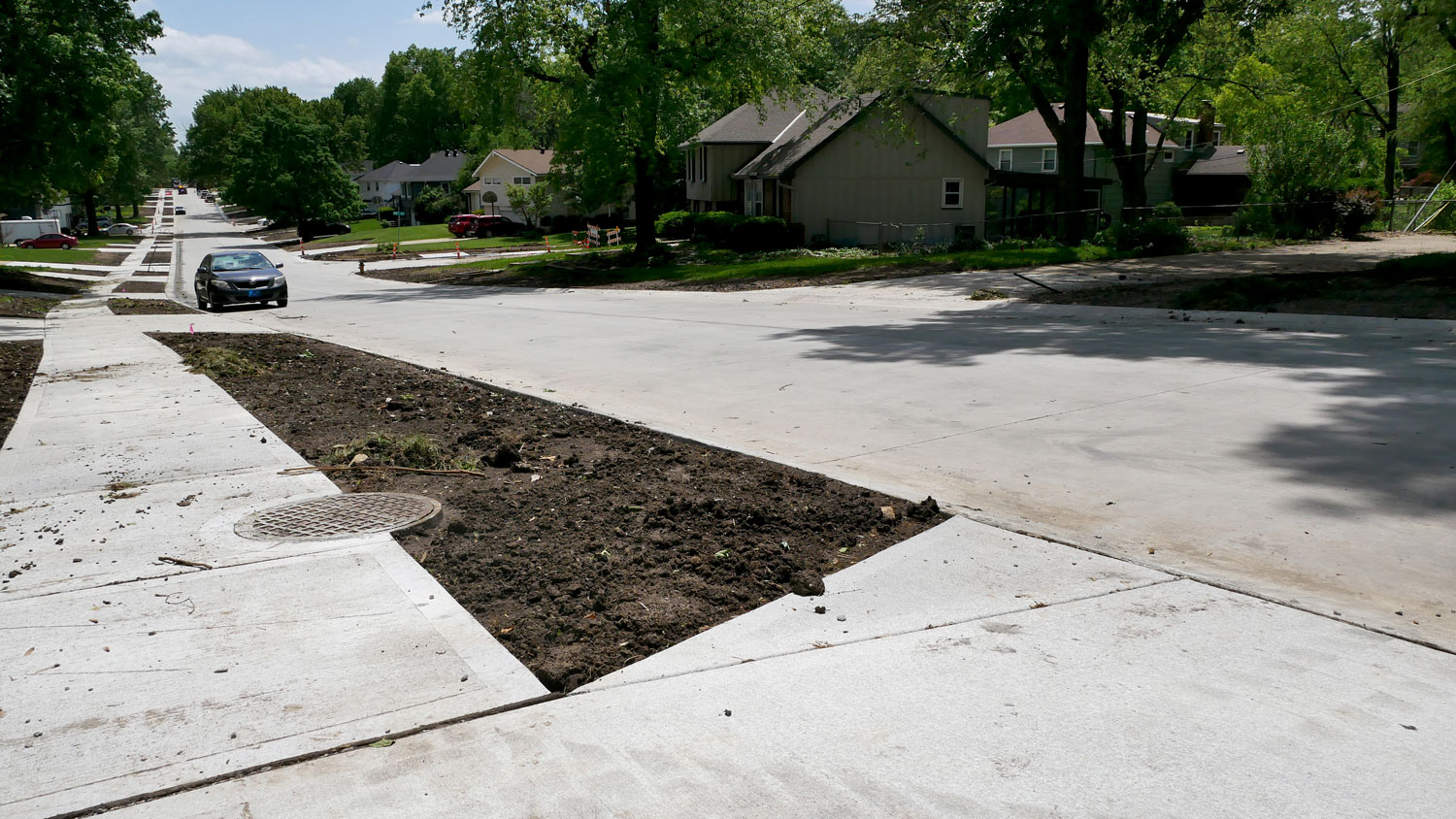 The city’s neighborhood street reconstruction program includes pavement replacement, driveway approaches, as well as sidewalks, storm sewers, and street lights. Streets improved with this project type may not need to be rebuilt or repaved for as long as 50 years.

The impact of this project type varies by neighborhood and depends on other needed infrastructure upgrades, but streets often must be closed for weeks or months in order to complete the work. At times, street trees must be removed to accommodate infrastructure, but will be replaced. City staff meet in-person with residents in the area to provide as much notice and information as possible.

Upgrades are funded by the Capital Improvements Program with the 1/8 cent sales tax revenues.

There will be no project in 2022. The 2023 Neighborhood Street Reconstruction Program Locations will include the subdivisions of Monitor Square and Briarford Place (near 99th and Roe). 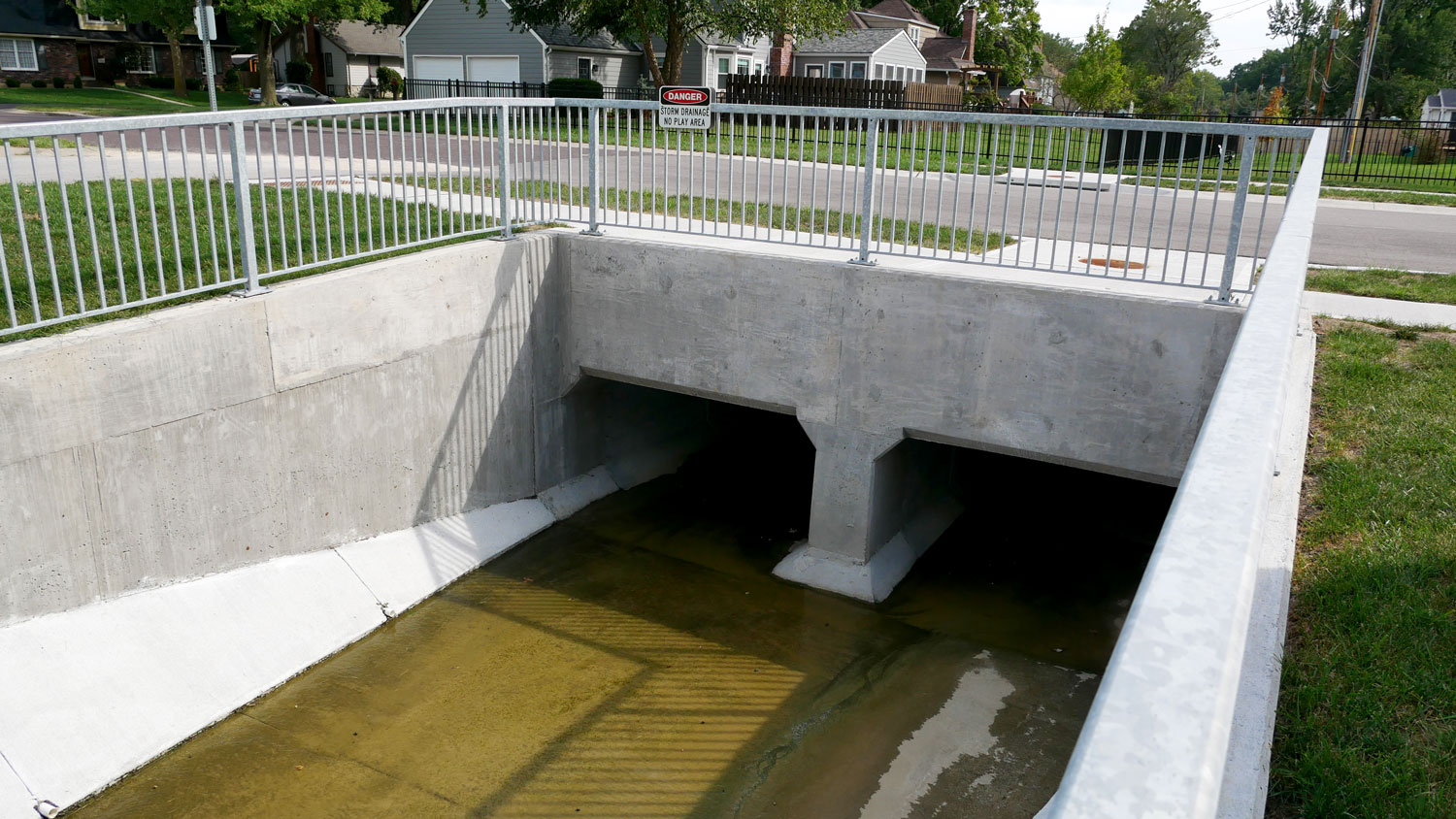