The City’s Public Works Department follows a priority system for clearing snow and ice from more than 2,000 lane miles of streets and bridges. This includes: 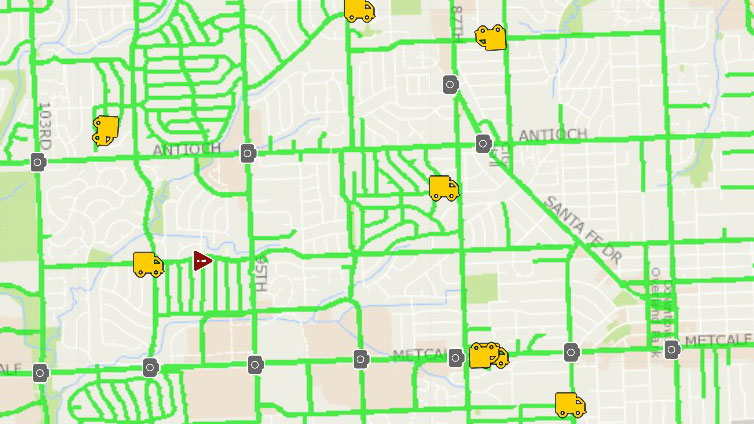 When snow crews are plowing or treating, use this map to view plow locations, live photos and videos of street conditions, and when your street was last treated or plowed.

Report and track a snow or ice removal issue directly online by submitting a ticket with OPCares, the city’s online customer service tool.

Before filing a request for a missed street, be sure you understand the priorities snow crews use when plowing and treating.

Report and track damage caused by a snow plow by submitting a ticket with OPCares, the city’s online customer service tool.

Call 911 if you have an emergency.

During snow events, walk all minor crash reports in to the Overland Park Police Department within 72 hours. Minor crashes happen when

During a typical snow operation, the city’s streets are plowed by two crews working 12-hour shifts. Crews follow routes based on street priority.

Call 911 if there is a medical, fire or other public safety emergency. Police personnel will alert snow plow drivers and resources will be immediately dispatched to provide emergency service support.

Strategies can vary by storm, but typically snow crews plow and treat city streets in the following order:

Two-lane streets that move traffic to a thoroughfare street are plowed from the start of snow operations until completed. Collectors typically border neighborhoods or commercial areas and include Lamar Avenue, 71st and 133rd streets. These are typically completed in the first 12-hour shift.

Residential streets are plowed after snowfall stops and after other priority streets are treated and cleared.

Crews will apply materials to improve traction, but may not plow residential streets for ice or snowfall less than two inches. Plows will make a single pass around the perimeter of cul-de-sacs. When a large storm results in the buildup of snow and ice, crews will completely plow cul-de-sacs after all streets have been completed.

Overland Park’s plow crews cover thousands of lane miles each storm. Residents and business owners can help by following the guidelines below.

While streets are being plowed or treated

After streets are plowed or treated, keep sidewalks free of ice and snow.

Plows typically leave a windrow of snow at the end of each driveway. It is each resident or business owner’s responsibility to shovel blocked driveways.