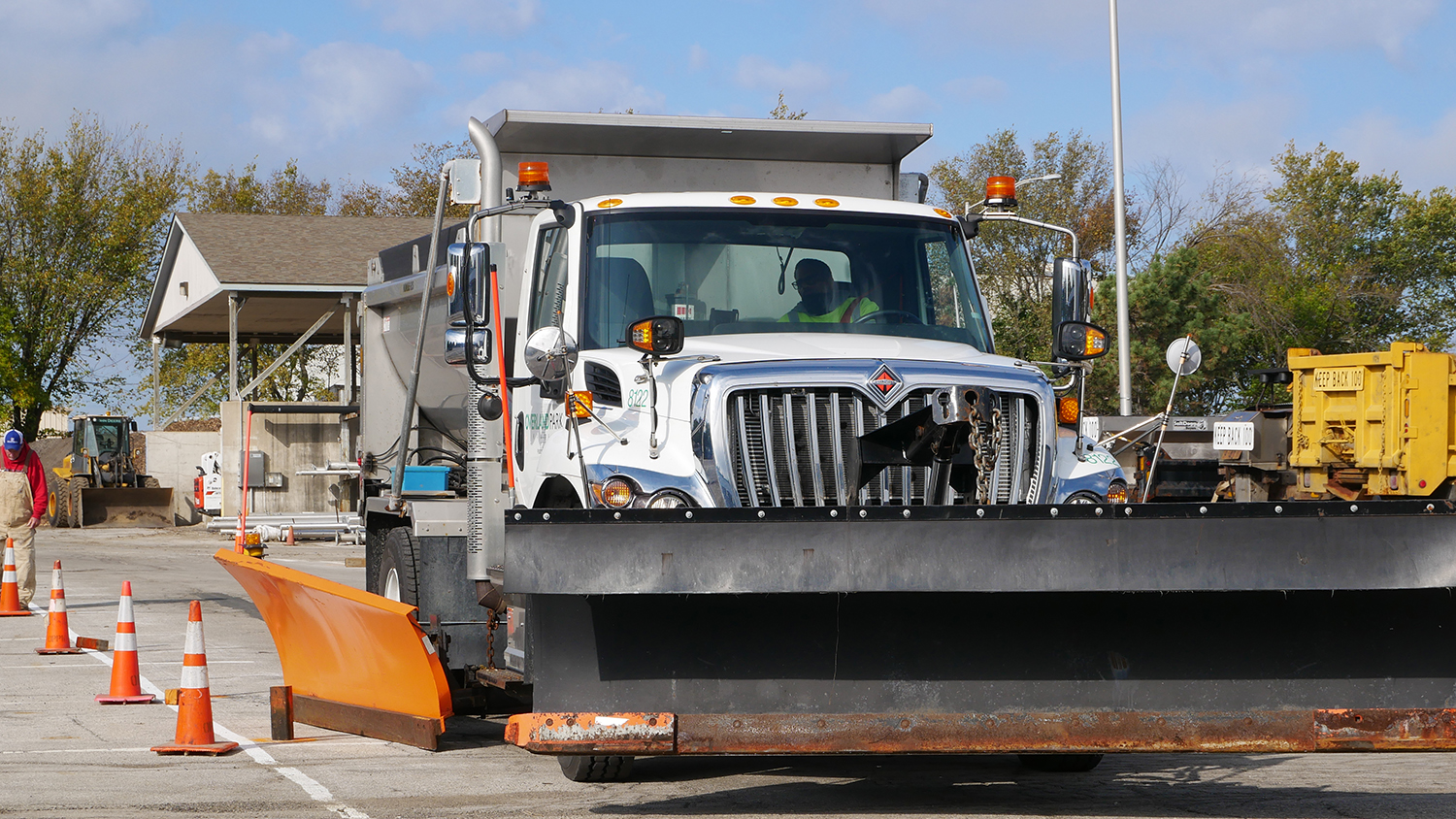 Following weeks of training, Overland Park snow crews are prepared for anything Mother Nature throws at us this winter. You’ll see them out treating and plowing City streets once the snow season begins, which could be very soon.

Early forecasts from the National Oceanic and Atmospheric Administration anticipate a normal amount of snow this winter, but snow crews are ready to get behind the plows in the case of snow and ice.

Here’s what you can expect as we get closer to our first snow, and how you can help our drivers during snow events.

Drivers hit these test courses to practice their driving skills, from using the wing plow to backing up and navigating cul-de-sacs. Every single driver is required to go through this training annually to make sure they’re properly trained before snow season.

Following the test drives, all members of the snow team worked together on a series of “dry runs.” Snowplow drivers, one-ton truck drivers, dispatchers and snow bosses coordinated mock snow events so drivers could get accustomed to their routes.

One-ton truck drivers learned how to properly assist snowplow drivers with hard-to-reach spots. Dispatchers communicated with the drivers to make sure they were following their routes properly.

Once fully trained, crews gathered in mid-November for their annual snow rally. This event kicked off the snow season with a message from Mayor Carl Gerlach and a first look at the season forecast.

In a regular snow season, more than 170 City employees from Public Works, Parks and Recreation, Planning, Police and Fire pitch in during snow events.

However, like much of the country, the City is currently dealing with labor shortages of our own. We are close to, but not quite at, the number of drivers we need during snow operations. This could affect snow operations this snow season.

Public Works recently increased starting pay from $16 to $18 for maintenance workers, who work as snowplow drivers during snow operations. If you are interested or know anyone who’s interested in applying, apply at recruit.opkansas.org.

The City clears snow and ice from more than 2,000 lane miles of streets and bridges, and this is a massive undertaking even when we’re fully staffed. Crews work in 12-hour shifts, following routes based on priority.

During a snow event, snow crews focus first on “priority” streets, including thoroughfares like Quivira, Metcalf and 119th Street. These are streets that move the highest volume of vehicles, including emergency equipment, and are plowed continually.

After finishing priorities, crews will move into collector streets that border neighborhoods and commercial areas, which are typically completed in the first 12-hour shift.

Once these streets are completed, crews will hit neighborhoods to plow and treat residential streets. We ask residents to be patient considering the staff shortages and the fact crews won’t get to residential streets right away during a snow event.

How you can help snow crews

Clearing snow and ice is a team effort, and this includes the assistance of all residents and business owners in Overland Park.

If snow is expected to fall overnight, please be proactive and move your car off the street. This ensures crews are able to navigate your street safely and plow snow all the way to the curb.

We also ask that you give crews plenty of room to work. If you’re driving behind a snowplow, please stay back at least 100 feet. Don’t hesitate to give them a friendly wave as you see them pass through your street, too.

During snow events, you can keep up with snow crews’ plans on our Facebook, Twitter and Instagram pages. If crews miss your street, report and track the issue using OPCares, the City’s online customer service tool.