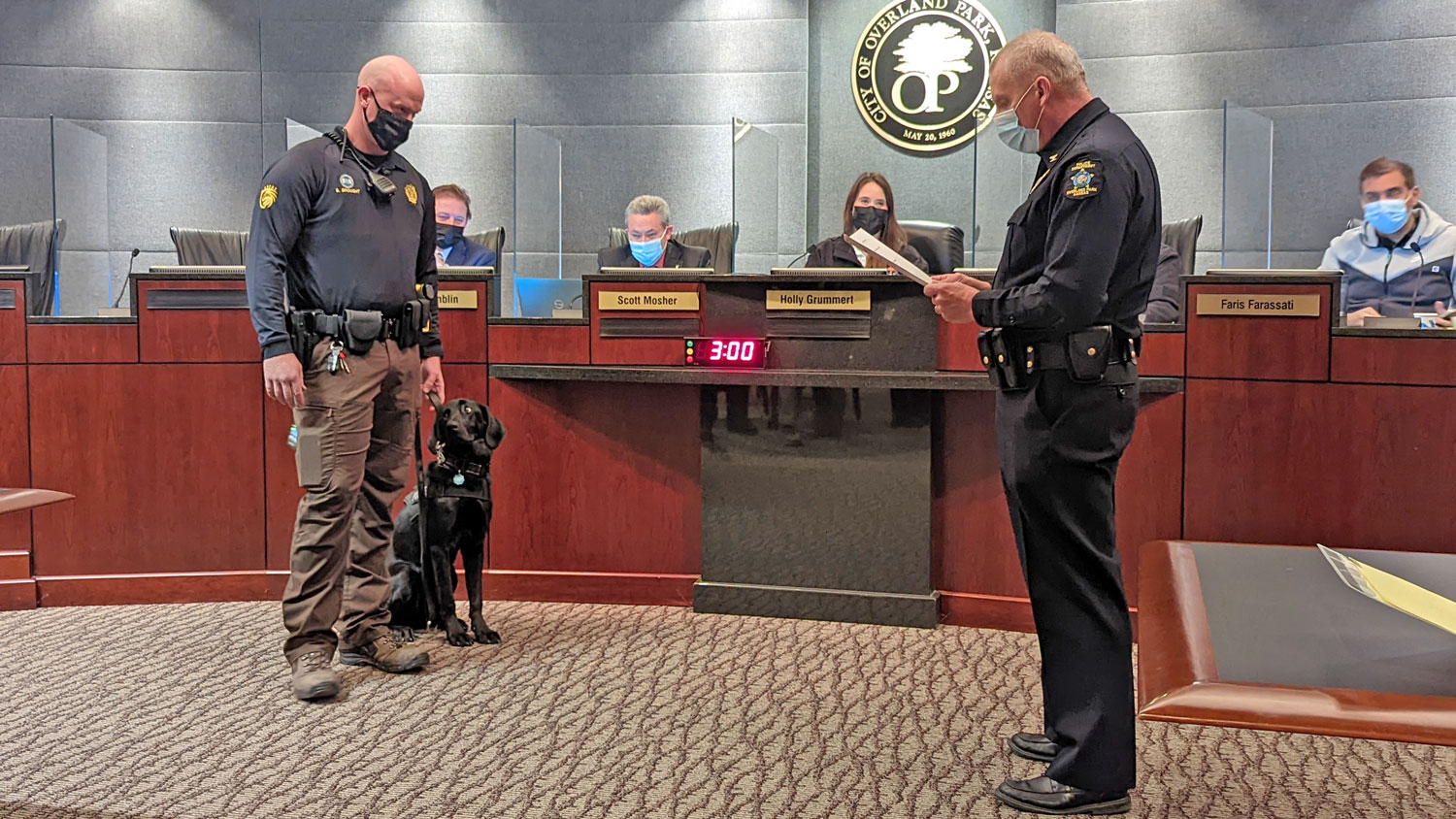 The Overland Park Crisis Action Team has hit the ground running in 2022, and there’s already a new four-legged team member on board.

OPCAT began full operations on Jan. 1 and is currently adding staff. When the team is complete, it will have 12 Crisis Intervention Team (CIT) Specialists and three Johnson County Mental Health co-responders ready to serve the public.

The Overland Park Police Department current responds to around 400 calls each month that have a behavioral or mental health connection. The team will increase trauma-informed response to those calls.

All members of the crisis action team will be trained to respond to all types of crisis calls for service.

The unit will also have officers trained to assist with common types and causes of mental health issues, including:

“I’m excited about what we’re bringing to the table. It covers a broad range of the community,” said Chief Frank Donchez. “It’s very exciting to have officers who have interest and training in these specialty assignments and can serve our community with that knowledge.”

OPCAT specialists will respond along with co-responders. Co-responders are Johnson County Mental Health clinicians who respond with law enforcement officers when behavioral health is identified as a possible contributing factor at the scene.

Crisis Action Team members are part of the Police Department, but wear a scaled down version of a typical police uniform.

OPCAT uniforms include khaki-type pants and black polos rather than the typical navy police uniform with tactical gear.

Officers from the team will drive plain SUVs rather than marked, tactical police cars.

OPCAT members will be able to respond to other calls if needed, and can easily transition to the more identifiable, typical police uniform.

Now officially part of the team, Haven will provide peer support to the Police Department and assist on calls for service where an animal can help an officer form a bond with a mental health citizen in crisis.

Therapy dogs can be helpful in assisting children through difficult situations and can help the public form bonds with the Department at community events.

She is a Labrador Retriever-mix, rescued from a shelter in Texas.

Overland Park has been growing its crisis response team for some time.

The City’s first co-responder became part of the department in 2014. In 2021, Overland Park added two crisis intervention team specialists and co-responders to an informal team of professionals handling mental health calls for service.

In May of 2021, the Mental Health Task Force presented its recommendations to the City Council – which included establishing a special unit within the Police Department to provide continuous coverage and 24/7 response for mental health calls.

Learn a little more about the professionals serving on OPCAT, including Haven, on the OPCAT webpage.