While on the Council, Gerlach served as Council President in 2003-2004, and as Chair of the Community Development and Finance, Administration and Economic Development committees.

He has maintained his community involvement, currently serving on the board of Shawnee Mission Medical Center, on the Johnson County Education Research Triangle (JCERT) Authority Board of Directors, and as a board member of Mid-America Technology, Inc. He is also a Johnson County Community College Foundation board member. In the past, the mayor has served on the Friends of Johnson County Developmental Supports board, along with the Greater Kansas City Chamber of Commerce board of directors, and as the chairman of the Kansas Lottery Commission.

The mayor is honored to have received the 2013 Ewing Kauffman Distinguished Eagle Scout Award and the 2012 NAACP Martin Luther King Jr. Legacy Award. The Crescent Peace Society presented its 2013 Peace Award to Gerlach in recognition of his commitment and efforts to promote pluralism, understanding, tolerance and acceptance of religious and cultural diversity in Greater Kansas City. The Kansas City Business Journal listed Gerlach in its Power 100 of Kansas City’s Movers and Shakers and Ingram’s listed him among the 250 Most Powerful Business Leaders in the Kansas City Area. He also received the 2018 Arts Advocate award from ArtsKC and the Raindrop Award for Outstanding Public Service from the Dialogue Institute.

Gerlach is married to Jill, and they have three children – Chris, Jennifer and Katie. He is retired from a major screen printing company in the promotional products industry where he served as Vice President of Marketing. The mayor recently served as the chairman of the Promotional Products Association International Board of Directors. 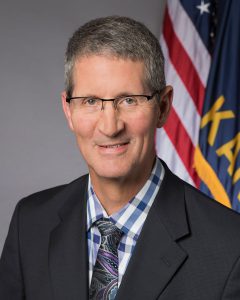