Council Member Lyons has a bachelor’s degree in Electrical Engineering from the University of Missouri and a master’s in Computer Science from the State University of New York. He is retired from DST Systems, Inc., a financial services company headquartered in Kansas City, Missouri.

Prior to joining the City Council, Lyons served as chairman of the Overland Park Environmental Advisory Council and as an officer of the Neighborhood Conservation Program Executive Committee.

He also served as co-chairman of the Glenwood Estates Neighborhood and was a member of the Unimproved Residential Street Task Force and the citizens committee for the Matt Ross Community Recreation Center in Downtown Overland Park.

Council Member Lyons was a volunteer for the Boy Scouts of America and helped his two sons achieve the rank of Eagle Scout. He and his family have lived in Overland Park since 1993. 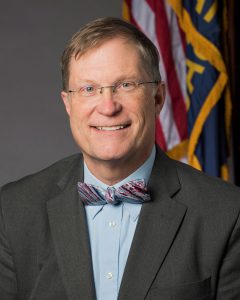