Dr. Faris Farassati was elected to the City Council in November, 2017, and was first appointed to the Council in May, 2017, to fill a vacancy in Ward 5.

Farassati is currently a senior cancer scientist at the Kansas City Veterans Affairs Medical Center, focusing his efforts on alleviating the suffering from cancer for our Veterans and general population. He is a frequently invited speaker at national and international cancer meetings. His previous appointments include Associate Professor of Medicine at The University of Kansas Medical School and the Assistant Professor of Medicine at University of Minnesota Medical School.

The Department of Homeland Security, US Immigration & Citizenship Services granted Farassati permanent residency to the United States under the category of “extraordinary ability” for his achievements in advancing medical sciences.

Some of his honors include:

Farassati has been married for 23 years. His wife is an Associate Professor of Medicine at KU and is a gastroenterologist at the KU Health System. They are proud parents of two beautiful children.

His favorite quote is by Abraham Lincoln: “With malice towards none, with charity for all.” 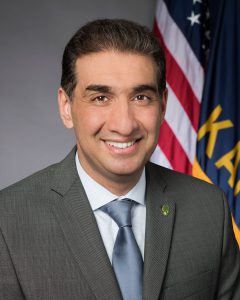