Tom Carignan was elected to the City Council in November 2019.

Carignan has been a resident of Overland Park since 2008. He and his wife Lizbeth are parents of two grade school-age children, both born in Overland Park.

Professionally, Carignan has worked in the financial services and banking industry for over 15 years. He holds a Bachelor of Arts from the University of Kansas and a MBA from Rockhurst University. Lizbeth holds bachelor’s and master’s degrees in computer systems administration and works in the insurance industry.

Carignan has been actively involved in the metropolitan community for many years and considers service part of his DNA. He completed Leadership Lawrence in 2005, Leadership Kansas in 2015, served as Chairperson of the Hispanic Chamber of Commerce of Greater Kansas City and Vice-Chairperson of the Health Forward Foundation. He is a member of the United Way of Greater Kansas City’s Board of Trustees. He has also completed the Johnson County Sheriffs Citizens Academy and currently serves as on the Regional Advisory Board of the Greater Kansas City Community Foundation. 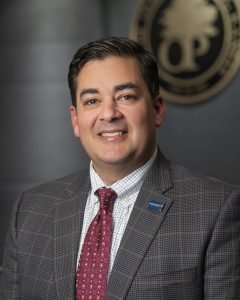