Hamblin is a Kansas State University graduate, with a dual degree in Airway Science and Aeronautical Technology. He earned flight many flight certifications and licenses, allowing him at Kansas State as a flight instructor. Hamblin has worked as an air traffic controller for the Federal Aviation Administration in the Kansas City area for more than 17 years. At the FAA, he tests and develops new technologies to advance the safety and efficiency of the national airspace system, and is involved in the training and advancement of employees new to the career field.

Hamblin and his wife Curstin have four young children in the Blue Valley District. In his free time, Council Member Hamblin enjoys spending time with family. He also coaches youth sports through Blue Valley Recreation, including baseball, basketball, and football. He finds the opportunity rewarding and enjoys making a positive impact on young athletes. 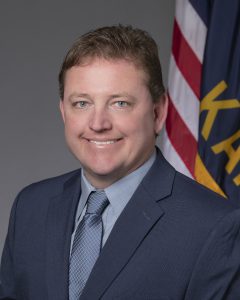